Home News Leke Adeboye Reacts To The Demise Of His Brother, Dare 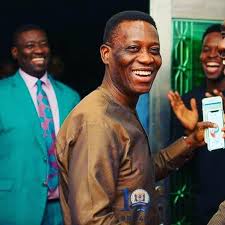 Leke Adeboye Reacts To The Demise Of His Brother, Dare

Touchaheart Nigeria reports that Leke Adeboye has finally confirmed the passing of his brother, Dare Adeboye.

Leke Adeboye who is one of the sons of the General Overseer of the Redeemed Christian Church of God, Pastor Enoch Adeboye, has reacted to the demise of his brother, Pastor Dare Adeboye.

Leke Adeboye in his reaction on his official Instagram page posted a scripture from the bible on the death of the righteous.

“The righteous man perishes(at the hand of evil), and no one takes it to heart, Faithful and devout men are taken away, while no one understands.

That the righteous person is taken away(to be spared) from evil and disaster.”

He also shared throwback photos of himself and his brother with their other siblings.

Meanwhile, no official statement has been released by the family announcing the passing of the clergyman.

The Senior Personal Assistant of Enoch Adeboye of the General Overseer of the Redeemed Christian Church of God described his deceased brother as a miracle child.

It was gathered that the Assistant Pastor in Charge of Region (Youth) 35, had ministered the previous day.

According to the wife of the deceased, Temiloluwa Adeboye, she realized her husband’s unusual sleeping hours and couldn’t get him on phone. She allegedly alerted her neighbours and he was found dead. It was said that the deceased was neither ill nor on medication before the unexpected happened.

“He was not sick and did not complain of anything before the incident. Pastors in the church were summoned to pray for him, all to no avail”

The clergyman passed at 42 years and would have been a year older in June. He left behind a beautiful wife and two children.

Cardi B Surprises Megan Thee Stallion With A Birkin Bag As ‘WAP’ Debuts At...

Clergyman Mike Bamiloye Advises Singles On The Type Of Husband/ Wife To Marry If...