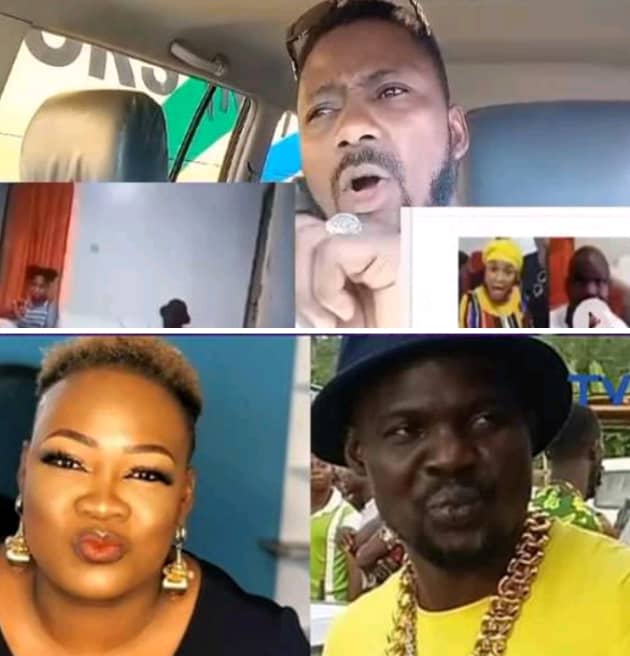 Touchaheart Nigeria reports that Sir Koro has called out Iyabo Ojo and Princess for masterminding Baba Ijesha’s rape ‘set up’.

Abimbola Olasunbo, Popular comedian and Instagram sensation, known as Sir Koro has alleged that Comedienne Princess and Nollywood actress Iyabo Ojo are behind the set up of Baba Ijesha and they deliberately set up the embattled Yoruba actor, Olanrewaju James aka Baba Ijesha.

This online news medium reports thst the embattled actor will face a five-count charge following an alleged rape and sexual assault on a minor.

This allegation, which has been a subject of public debate, has also pitched actors and actresses in different tents.

The now-viral CCTV footage, which showed the embattled actor kissing and fondling sensitive parts of the body of the minor, surfaced online on Sunday morning.

The eight-minute long footage, which Touchaheart viewed, sees the actor licking and sucking the fingers of his victim.

He could also be seen caressing the minor’s legs and thighs in the video while the identity of the minor was not concealed.

The actor would later lift his victim’s dress as he further caressed her body.

In another video, the comic actor was allegedly caught pant down, sitting on the floor and pleading for forgiveness while being questioned by Princess and other people.

In the two-minute video, Baba Ijesha could be seen and heard echoing, “Please forgive me, I won’t do it again.”

But reacting to the video, Olasunbo Sir Koro expressed his displeasure over Baba Ijesha’s act, but has raised salient points on the allegations.

“I do not support Baba Ijesha, let me clear that air, but I want every man to know that no man is a freeman, when the home is empty, everyone is a thief.

“There is a secret behind all of these dramas, especially with Iyabo Ojo’s insistence on pursuing the case to the latter.

“Do you know that Aunty Iyabo has been raped before? Please don’t be offended Aunty Iyabo, it is because I know how pained you are over the matter.

The secret about Aunty Iyabo’s rape is also known to Baba Ijesha and it is a top secret and this why Aunty Iyabo feel offended.

“Princess and Baba Ijesha have very intimate relationship for many who don’t know. They are dating themselves.”

“CCTV was not used in setting Baba Ijesha up, all those who have CCTV camera either at home or office, is it fixed to the ground level?

“The two men that were seen leaving in the video were the ones who came to set the 60D camera. CCTV does not pick voice but this particular camera picked their voice conversation.

“You will see in that video that the girl was the one who made the first move towards Baba Ijesha, then he made advances too and embraced her.”

Sir Koro further questioned why the girl was stationed to sit in the same spot even when she left to get something, adding it was a planned set-up.

He made a strong allegation that Princess had aborted a baby for the girl and that was what brought the matter to fore.

He however urged the government to arrest Princess, the girl and the two men who were involved in the setting up, before passing its final verdict on Baba Ijesha.

“Losing a loved one is never easy; TB Joshua’s Wife

DSS Speaks Up On The Disappearance Of  Father Mbaka