This online news medium gathered that he was said to have died after after his pastor sprayed perfume on him while he was holding a lit candle during prayer on Wednesday, May 5, 2021.

Touchaheart understands that Badru had visited the Celestial Church of Christ for prayers and was asked to kneel down while surrounded by seven elders and several lit candles. 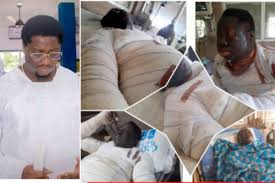 “He was holding a candle then the prophet of the church, Felix Alebiosu, sprayed perfume on his body from his head to toe. Within a few minutes, his body caught fire.

He suffered severe burns and was rushed to a hospital in Gbagada, Lagos.

Prophet Felix Alebiosu ran away immediately after the incident but was later arrested alongside two out of the seven elders.

They are currently locked up in Panti police station, Lagos State.

Those Who Elected Us Don’t Know Our Role – Lawan

Why we arrested Shina Peller – Police