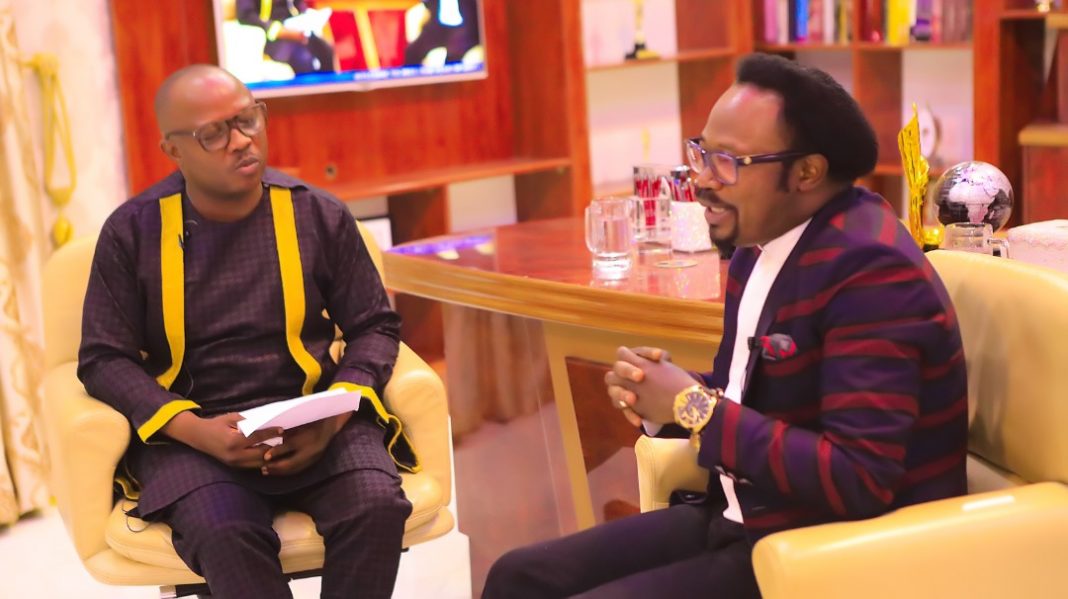 Touchaheart Nigeria reports that Prophet Iginla at his birthday reveals how he survived hard times in his ministry two years back.

The General Overseer of Champions Royal Assembly, Prophet Joshua Iginla has for the first time spoken about the crises that He faced in 2019, after he made an open confession about his marriage to his Ex-wife in a live service.

Prophet Joshua Iginla during this period received backlash from several individuals, men of God who feel he has done the wrong thing despite the fact that He willingly made the confession, and had settled with God before coming out.

This period were tough times in his ministry, and for sometime, He was not in Nigeria.

In a tell-it-all interview session yesterday, Prophet Joshua Iginla who is celebrating his birthday alongside his wife, Prophetes Stella’s own this week stated that it wasn’t totally rosy for him at that time because he was lashed mostly by men of God, and his spiritual sons but appreciated God that he came out waxing stronger.

‘‘Last few years have been stormy, but to me, I see them as blessings.

Sometime people ask if I don’t feel pained, I saw it as a process of becoming a solid believer in the Lord, it has further enhanced my passion for God.

Every storm, which I call blessing have brought me to a new level, I have kept on going higher and bigger.

My background in the Lord has been very challenging and tasking.

when I gave my life to Christ, my father of blessed memory kicked against me, yet I didn’t give up.

This helped me have thick skin no matter what I face in life.

A lot of people said so many nasty things about me, some who don’t understand my story, who don’t even know me personally said a lot about me then which is normal but one of the most important thing is when God is with you, every other thing is inconsequential, every other talks are side talks.

My joy was that I have touched the heart of God by obeying him to correct errors around my life, I did them, came out strong and have peace today.

God is using me to help a lot of pastors, politicians who feel like giving up because of their crisis due to the virtue of experience I have gotten through the trials of life’’

The man Of God spoke about the lessons he learnt during this period, while explaining how God used his wife, Prophetess Stella to heal his wound during the perilous time in his ministry.

‘’During these trials, I learnt that human beings are human beings, anybody can disappoint you at any time, you don’t put your trust in a man of God.

I learnt that the enemy of a man of God is a man of God, your enemies are not too far, don’t allow fear in life to ever consume you, face your goliath, deal with your storm and come out.

Every other opinion is infinitesimal to the opinion of God. Men are men, people are entitled to their opinion, you don’t have to stop anyone to think the way they want to think, the most important thing is to be your believer and God’s believer’’

for my wife, Prophetess Stella, she is a divine blessing, and compensation to my wound and pain, as you can see me, I am waxing stronger.

This is not to say I am encouraging divorce, I don’t pray anyone goes through it, howbeit, this is how God has pushed my life.

Jesus said the only reason to divorce is on adultery grounds, I will continue to say my purpose of coming out to make a confession in 2019 is not to be hard on my ex, it is to confront the ills of my life, during that time, a lot of people took lash on me and they were men of God.

I came out to talk, no one forced me to talk, my confession was strictly about doing what is right, the bible says he that covereth his sin shall not prosper.

I had settled with God five years before that time so when I Came out to make my confession, it was not to take a lash on my Ex, it was to free myself from what almost took my life, two times I collapsed, two times I gave up, that’s not to say that my Ex is evil, I am only correcting the ills’’

Ogun Backs Down On Plan To Reopen Churches, Mosques

The X Factor Sunday results episodes have been scrapped for first time in 10...