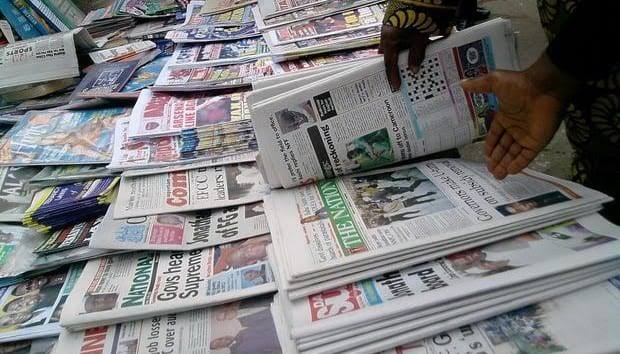 SCAM! WE ARE NOT RECRUITING- NNPC

This is to inform the public that the information circulating in the Social Media that the Nigerian National Petroleum Corporation (NNPC) is conducting a recruitment exercise IS NOT TRUE and the public should disregard it in its entirety…iexclusivenews.

President Muhammadu Buhari has arrived in Addis Ababa, the Ethiopia capital, on Sunday, for the inauguration of Prime Minister Abiy Ahmed for another five-year term in office..NAN

Ten months after a series of high-level bilateral talks between the Nigerian government and authorities in Ghana aimed at addressing the nearly decade-long controversy…Daily Trust.

The family of the kidnapped chieftain of the All Progressives Congress (APC) in Bauchi State, Alhaji Uba Boris, has expressed grave concerns over his whereabouts 12 weeks after his abduction, saying that his prolonged absence has impacted negatively on them… Daily Post

Nigerian Doctors May Call Off Strike On Tuesday

The Nigerian Association of Resident Doctors (NARD) may call off its months-long strike on Tuesday. In August, the doctor’s union embarked on strike following a disagreement with the federal government over the non-availability of medical equipment at public tertiary hospitals..Peoples Gazette

The Archbishop of Sokoto Catholic Diocese, Bishop Matthew Kukah, yesterday, declared that the President Muhammadu Buhari administration is not sincere in dealing with terrorists killing Nigerians. Wondering why it is difficult for the government to release names of sponsors of Boko Haram terrorists, the cleric declared that “Nigeria is decomposing from within.”…Vanguard

Global crypto adoption has led to the release of new policies by the International Monetary Fund (IMF) to ensure financial stability in emerging markets. Despite bearish trends since May 2021, the IMF sees crypto assets as a potential tool for faster and cheaper cross-border payments, citing the dramatic rise in the value of the crypto markets. Crypto adoption is attributed to high returns, lower transaction costs and speed, and reduced Anti-Money Laundering (AML) standards, according to the report…Nairametrics