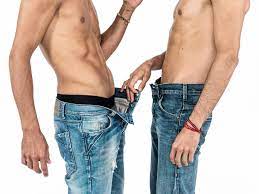 Taxi Driver Lynched For Having Gay Sex At Public Toilet

Touchaheart Nigeria reports that a taxi driver identified as Stephen, was almost lynched to death when he was caught pants down having sex with another man at a public toilet.

Witnesses account revealed that the act took place at the popular Mile 3 Park in the diobu axis of Rivers State.

An eyewitness said trouble started when a man in another toilet heard moaning that sounded like a man and woman having sex and was wondering how a woman was smuggled into the male toilet only to see that it was between two men.

The attendant of the public toilet, Mr Vitalis Andrew, told newsmen that Stephen and his partner had reportedly paid the fare required to have access to two different toilet rooms, but another customer, who was using one of the toilets, heard loud moaning.

Inquisitive to uncover the reason behind the sounds, he had climbed on something and looked over the wall separating the two toilet rooms to find Stephen having intercourse with his partner.

He said the two men after realising that they had been caught took to their heels before they could raise alarm. Stephen wasn’t very lucky as he was fished out and handed over to the police, while his partner escaped.