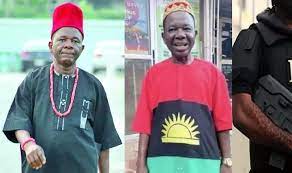 Actor Chiwetalu Agu Has Been Moved To Abuja By The DSS

Touchaheart Nigeria reports that the Department of State Services (DSS) has relocated veteran actor Chiwetalu Agu to the Federal Capital Territory of Abuja, according to The Nation.

The actor was originally apprehended by the Nigerian Army on October 7, 2021, near Upper Iweka in Onitsha, Anambra State, for wearing a Biafra uniform while distributing food to the impoverished.

He was accused by the army of seeking support for the banned Indigenous People of Biafra, which has been accused of terrorism in the past.

He was then turned over to the DSS to be investigated and prosecuted.

Attempts to see the actor in Abuja were refused by the DSS, according to a family of the actor who spoke about the new development.

“We heard that the idea is to move him away from the South-East. We have made efforts to see him, but the DSS has not granted us access. Even the lawyers have not been allowed to reach him” a relation said