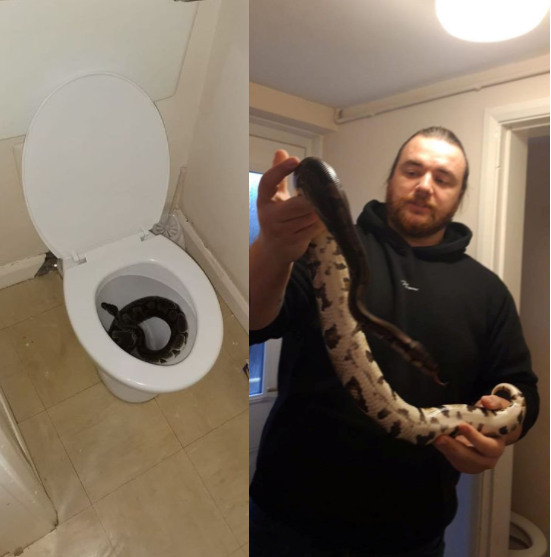 At 5.30 a.m., A Woman Discovers A Horrifying 4 Foot Python In Her Toilet

When a woman went to the bathroom early in the morning, she discovered a massive Python in her toilet bowl.

Laura Tranter, 34, a sports teacher in the West Midlands, England, was surprised to encounter the snake when she went to the bathroom at 5.30 a.m. on Saturday.

She claimed that the reptile was so large that it couldn’t even get out of the toilet.

Laura had to close and reopen the bathroom door to be sure she wasn’t hallucinating.

Then she called the RSPCA, who told they wouldn’t be able to help her until 7 a.m., when they opened. Laura then contacted her friend’s brother, Steve, who is a specialist in snakes and unusual animals.

“I woke up at half-past five in the morning to go to the toilet, and it was just there.

“It scared the hell out of me, I nearly sat on the thing. Its head was just resting on the seat.

“I shut the toilet door and thought, have I really seen that, so I double-checked if it was real – but I really thought I was hallucinating.”

“I went around my mate Sarah’s house at half five in the morning in my dressing gown and trainers. She was so confused she asked if I’d been drinking.”

Steve immediately drove the 20-minute distance to deal with the startling sight.

Because the snake was so large, Laura stated it was difficult to pull it out.

“It was actually stuck in my toilet, because it was so fat in the middle that it couldn’t get out and couldn’t get back.

“We couldn’t actually get it out, so we had to put washing up liquid down the toilet and then flush it to help get it out.”

Finally, Steve and his friend Dan retrieved the animal and handed it over to the RSPCA.

They all believe that it’s most likely an oversized pet that was discarded by its owner.