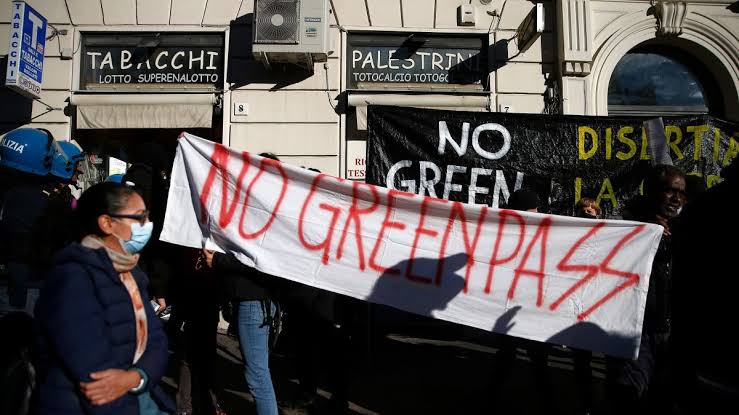 Workers of the world! Listen up…

It’s possible that half of Chicago’s police officers are no longer on the job. Their union does not want to be forced to reveal whether or not they have been vaccinated. In addition, 120 cops in San Francisco defied the city’s vaccination order.

Thousands of people are protesting in Italy about a new vaccine mandate that is too harsh. Many of them work at the docks, which is not good news for anyone who has been nervously reading about the global supply chain. According to CNN, up to 40% of workers at one port haven’t had the vaccine, according to their union.

Anyone on a public or private payroll in Italy is required to have a recent documented vaccination, recovery from infection, or a negative test within 48 hours. There’s an app for that, which would make everything so much easier, but we’re not willing to consider it in the United States.

According to the Italian government, 81 percent of the eligible population is vaccinated, therefore these protests are a solid indicator of where the country’s vaccination gaps are. Since September 1, a “green” pass in their app is necessary for select trains, indoor eateries, museums, and gyms.

However, it is this necessity for employment that has sparked objections, and it comes at a time when the Biden administration is attempting to impose its own requirement, via the Occupational Safety and Health Administration, that the vaccine is an issue of public safety.

I wish it were possible to know how many more people had the vaccine as a result of the obligation rather than opposition. I’m prepared to bet that a considerably bigger number of people simply got the shot.