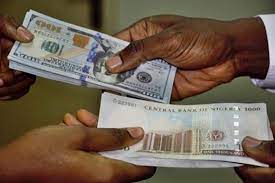 The massive gain is coming after Naira dropped by 2.6 percent to N422 per dollar last week Thursday, October 14, 2021, hitting an all-time low at the Nigerian autonomous foreign exchange (NAFEX) rate — the default FX reference for official and legitimate transactions.

Also, at the parallel market also known as black market, the Naira also gained on Monday, trading at N572 per dollar at the Lagos market on Monday morning after it traded at N575 per dollar last week.

Touchaheart Nigeria reports that the development is coming a week after Nigeria’s Vice President, Prof. Yemi Osinbajo, called on the Central Bank of Nigeria (CBN) led by Godwin Emefiele to allow the naira reflect the realities of the market.

Laolu Akande, spokesperson to Vice-President had explained in a statement.

“It is stopping this huge arbitrage of over N160 per dollar that the Vice-President was talking about. Such a massive difference discourages doing proper business, when selling the dollar can bring in 40% profit!

“This is why the Vice-President advocated for measures to boost foreign exchange supply rather than simply managing demand, which creates irresistible chances for arbitrage and corruption.”