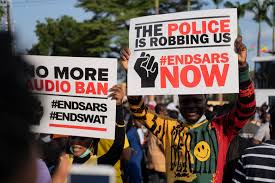 EndSARS protests slated for Wednesday in Lagos have been banned by the Lagos State Police Command.

Touchaheart Nigeria reports that the security agency stated that it never agreed to allow street protests on the 20th anniversary of the past year’s march, which claimed many lives.

Adekunle Ajisebutu, the Public Relations Officer, said on Tuesday that only indoor and virtual meetings will be permitted.

According to the spokesman, such gatherings will be adequately secured in appreciation of every Nigerian’s right to express his or her interest.

The police revealed that they had received information that some organisations or individuals were organising an anti-SARS demonstration.

Due to competing interests and the possibility of mayhem, any type of street demonstration is now illegal, according to Ajisebutu.

“The command believes it unsuitable to allow such protests to take place,” he said following a critical review of the planned protests and their repercussions for public safety.

“It will not remain silent and allow law and order to be disrupted as a result of the protests.”

The police have sworn to prevent a repeat of the heinous events that killed officers, people, and businesses in 2020.

“By allowing avoidable occurrences, the police will not abdicate their responsibility to protect lives and property,” the PRO stated.