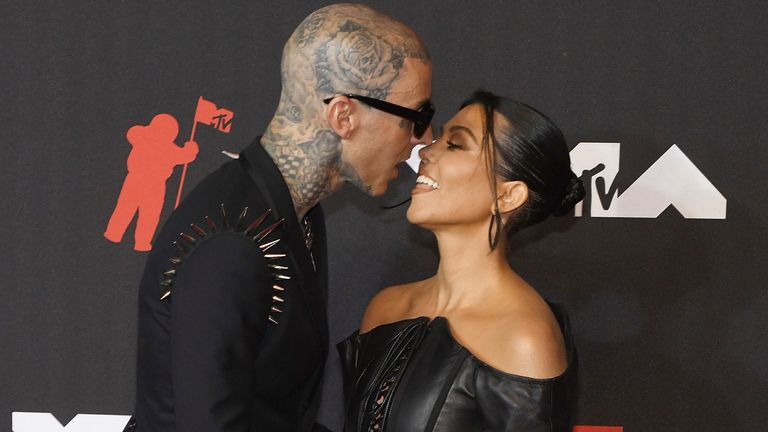 Touchaheart Nigeria reports that Kourtney Kardashian will go down the aisle for the first time in her life, and she’ll be accompanied by none other than Travis Barker, who recently proposed.

The Blink-182 drummer, Travis Barker dropped down on one knee at a beachside hotel in Montecito on Sunday, pulling up all the stops before proposing to her and asking her to marry him. Of course, she said yes… and celebrated with a big smooch.

Some of their friends and family were present to witness the event, and Trav lay out a magnificent floral arrangement of roses directly on the sand. As you can see, Kourtney was having a blast, jumping up into his arms while a private photographer snapped away.

This is shocking news… because, as you may know, the couple only started dating in the beginning of 2021, after being close friends for years.

Even so, that was lightning fast! As you’ve seen — and as we’ve recorded — TB and KK have been inseparable since they first met and went public with their relationship… and have never shied away from PDA, whether on the beach, at Disneyland, on the streets of NYC, in Italy, or in a variety of other locations.

By the way, Travis just hinted at this when he remarked that “forever” wasn’t long enough when it came to Kourtney. He was clearly thinking about wedding bells.

With her own post announcing the news, Kourtney shared that tone, posting a few of photos and wrote, “forever.”

It’s been obvious they’re head over heels for each other — and the fact that they’ve moved on to marriage so quickly says a lot about how much they love each other… especially considering Kourtney was with Scott Disick for years — and had several children with him — and she still hasn’t married him, despite the fact that he bought her a ring years ago.

Kardashian’s sisters welcomed the news, with Kim Kardashian posting engagement ring emojis beneath the post. She also took to Twitter to post a video of the couple, captioned “KRAVIS FOREVER.”
Kendall Jenner posted a zoomed-in image of Kardashian’s hand — and engagement ring — as she cupped Barker’s face.

The duo started dating in January 2021, though they’ve been friends for years and the Blink-182 drummer had made an appearance on the popular television series, ‘Keeping up with the Kardashians’.

The 45-year-old drummer popped the big question, as he asked Kardashian to be his wife and she said yes. They shared hugs and kisses to seal their engagement.

With this marriage proposal, Kardashian would be getting married for the first time, even after she has had three kids for her ex-lover, Scott Disick.

Barker was also previously married two times. He was first married to Melissa Kennedy from 2001 to 2002.

From 2004 to 2008, Barker married Shanna Moakler and they had two children together.

She also dated Younes Bendjima for a period a few years ago, but their relationship didn’t last.

She now appears to be ready to embark on her happily ever after trip.