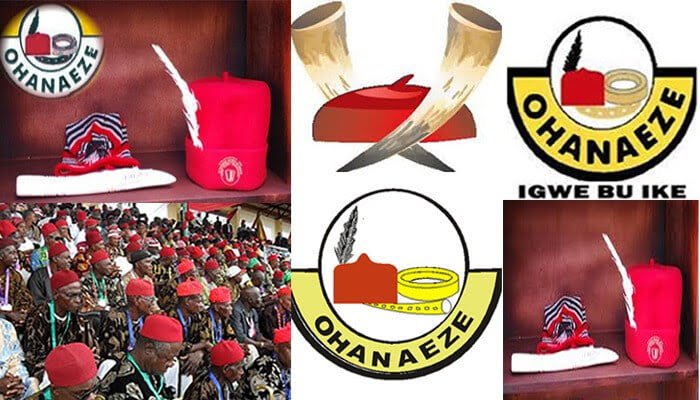 See What Ohanaeze Asks Buhari To Do About Nnamdi Kanu

See What Ohanaeze Asks Buhari To Do About Nnamdi Kanu

People in the South-East are waiting for the trial of Mazi Nnamdi Kanu, the leader of the Indigenous People of Biafra, IPOB.

Kanu is scheduled to appear in court tomorrow, Thursday, October 21, as the court resumes hearings in a treason case filed by the federal government against him.

The Court had already given both parties with a hearing notice, with the Federal Government also filing an updated charge against the IPOB leader.

His group threatened to shut down the South-East if the government did not show him in court a few weeks ago, escalating tensions in the already tense region.

Mazi Okwu Nnabuike, the President-General of the OYC, said the Federal Government has a chance to defuse tensions in the South-East in a statement made available to DAILY POST.

“I must state that the Federal Government faces a date with history tomorrow. We’ve heard from numerous sources that the administration is pleased with the increased tensions and insecurity in the South-East, but we refuse to believe it.

“However, the moment has come for the government to clear itself of these charges. The first step is that nothing should prevent Mazi Nnamdi Kanu from appearing in court. There are no excuses because the government possesses all of the necessary weapons and security apparatus.

“The best way to de-escalate the unrest in the South-East is for Kanu to be charged in court tomorrow.”

“The Federal Government should not consider any other choice because it would be a recipe for disaster and enormous hardship in the zone,” he said.

“The Ohanaeze Ndigbo Youth Council Worldwide has been interacting with the outraged youths in Igboland, and we have maintained to assure them that a political solution would secure Kanu’s freedom,” Okwu said.

We do not anticipate the government squandering this chance.

“We see no reason why the Federal Government should not engage in discussion with the disgruntled Igbo youths if it can easily free and integrate Boko Haram terrorists who have slaughtered Nigerians and security officers in large numbers.

“Sending the military to the South-East will never result in a long-term solution; instead, it will intensify the problem.”