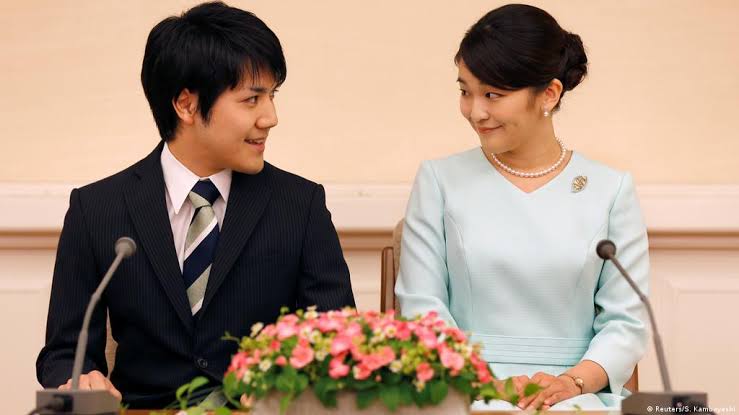 Touchaheart Nigeria gathered that Princess Mako married her university sweetheart Kei Komuro, both 30, and the Imperial Household Agency of Japan filed the formal paperwork to register their marriage in Tokyo, according to Kyodo News.

The couple met in 2012 and have been together since they were students at Tokyo’s International Christian University.

They were unofficially engaged in 2017, however the wedding was postponed owing to a financial disagreement between Komuro’s mother and the couple.

Komuro has stated that he is “seeking to resolve a financial disagreement with his mother.”

Komuro returned from New York, where he works for a legal business, after Japan’s imperial agency announced a date for their wedding earlier this month.

After the former princess acquires her passport, the couple intends to reside in the United States.

The imperial family of Japan does not require travel documents; but, if a female member marries outside the family, she loses her position and must formally apply for travel documents.

Mako and Komuro chose to just offer introductory remarks during a news conference and release responses to five selected questions shortly after their limited wedding ceremony.

Mako was “diagnosed with complex post-traumatic stress disorder induced by what is claimed to be mental maltreatment,” according to the imperial agency, which blamed the princess and Komuro’s family for the excessive media coverage in recent years.

Mako became the first female member of the royal family to bypass the associated ritual rites following World War II when she married without them.

Mako lost her royal position by marrying a foreigner, but she is entitled to a lump-sum payout of around $1.3 million from the imperial family.

The princess, however, has stated that she will not accept the money, making her the first Japanese royal to decline such an offer.