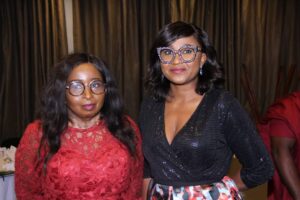 The Film Industry Is Important To Us And We Are Ready To Do More- Mrs. Ibijoke Sanwo-Olu

Touchaheart Nigeria reports that the wife of the Lagos State governor, Mrs. Ibijoke Sanwo-Olu has been made the matron of the Association of Movies Producers in Nigeria.

This is coming as the association honored dignitaries that had contributed immensely to its success in recent years during an event to launch the association’s share to the public and induct new members.

Speaking after she was conferred the hounour, the first Lady who was represented by the wife of the Deputy Governor of Lagos State Mrs. Oluremi Hamza, expressed gratitude to the association and promised to ensure her massive supports to lifting Nollywood higher.

She also explained that her office and Lagos State had been holding Nollywood in high esteem, adding that the movie industry is very important to the government of Lagos State.

“Lagos State has done a lot for the Nollywood industry, and we are ready to do more. As you all know, the film industry is important to us, and we are not relenting to lend our supports because you are also our face in society. We recently rolled out loans with no interest for film producers to produce their works and this is just the tip of the ice bag as we have more programs to benefit the producers in the industry. Just be rest assured that Lagos government is with you”.

The president of the association, Ms. Peace Anyiam Osigkwe MFR while speaking, praised the first Lady, describing her as a character to always emulate.

She expressed her appreciation to the first lady for honouring the association, saying she had demonstrated good leadership skills just like her husband, governor Babajide Sanwo-Olu who was also represented at the event. She also, appreciated Mrs Uzama Akinbile Yusuf, the commissioner for Arts and Culture for all her support and forever been there for Association of movie producers. According to the president, whenever we come with any request or call your number, even though is in the middle of the night, you always listen to us.

Boyo had demonstrated a strong leadership prowess to AMP, especially as he announced support of N58million worth of equipment and truck to encourage the association.

She added that Boyo’s mentorship and supports to the association in the last 15years was immeasurable.

The president also acknowledged executives of the association for their services that have been sustaining them over time, praying God to reward them excellently.

Meanwhile, Boyo, while speaking, appreciated God for the journey of the association and promised to do more in supporting them. He said the donated equipment and truck that is worth N58m would help the association to move forward, stating that his intention was to work with the AMP executives to develop a self-sustaining model that will benefit all members.

Boyo also reiterated that “This sustainability model is now being implemented at National. Once it has stabilized, the move will be to empower all state chapters”.

He also appreciated the officials of the association, government, and other partners who have been supporting and would still support AMP again.

The turning point of the event include the presenting of the AMP to the Corporate World which is the reason for the Launch of AMP Creative Hub Cooperative Capital Base, where dignitaries donated to the association.

Meanwhile, no fewer than five personalities were inducted into AMP as Patrons.

The event rounded off with a lot to eat, drinks, and a bandstand that got everyone dancing to beautiful soul-filling songs.