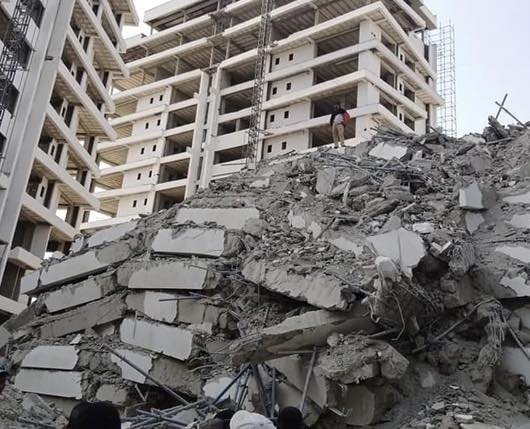 As the IGP visits the scene of the Ikoyi building collapse, the death toll rises to 14

The Inspector General of Police, Usman Baba, has arrived at the scene of the tragic Ikoyi building collapse as the dead toll has risen to 14.

According to TOUCHAHEART NIGERIA, the state Police Commissioner, Hakeem Odumosu, and several top police officers arrived at the scene with the police chief.

Baba entered the facility to assess the extent of the devastation and inquire about the rescue operation’s progress.

Meanwhile, the state administration announced on Tuesday that 14 persons were confirmed dead as a result of the building collapse.

Nine men were also recovered alive and sent to the hospital for medical treatment, according to the Commissioner for Information, Gbenga Omotoso.

For the rescue mission, extra equipment and staff have been sent, according to the commissioner.

Nine people have been rescued alive from the rubble, all of whom are men. They were rushed to the hospital. He added, “Unfortunately, 14 others were carried out dead – as of 2 p.m.”

Governor Babajide Sanwo-Olu has suspended Gbolahan Oki, the General Manager of the Lagos State Building Control Agency (LASBCA), according to Omotosho. Sanwo-Olu, he said, is committed to figure out what went wrong and hold those responsible for the collapse of the 21-story structure accountable.

The State Government, according to Omotosho, would appoint an independent panel to investigate the collapse of the building on Gerrard Road in Ikoyi.