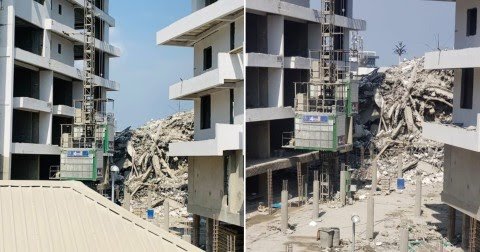 A skyscraper under construction collapsed

Monday in Nigeria’s economic capital Lagos, trapping many people inside.

The spokesperson for the Lagos State Emergency Agency, Nosa Okunbo, confirmed the collapse, saying, “A 25-storey building collapsed by Musliu Junction, Ikoyi.
Officials could not say how many people were trapped, but workers and neighbors were scrambling to pull people from the rubble.

The Commissioner of Police, Lagos State, Hakeem Odumosu explained that technical officers, site engineers, and government engineers will meet later to find out what caused this collapse.

“But for now, and what we are after which is the most urgent thing is rescue, to rescue lives that are there”, Odumosu told reporters at the site of the collapsed building.

Touchaheart blog gathered according to local residents and workers at the site, some of whom were covered in dust, dozens of people were inside when the building collapsed.

“We will not die this year, no matter how they say or want us to, I will live up to 120 years. I was going out to buy food to eat and I saw the building starting to collapse. There are many trapped inside there and I have a lot of people there that may never be found but I thank God for my life” Latif Shittu recounted.
“I feel very bad because the people inside have families.” he added.

At least three bodies have been recovered from the site as rescue operations intensified into Monday night.

Building collapses are common in Lagos. Ikoyi is one of the most upscale residential and business areas in Lagos, the economic capital of some 20 million people.

In October 2020, a building under construction collapsed in the area, killing eight people and seriously injuring 10.
In March of the same year, twenty people were killed when a building housing a kindergarten and elementary school collapsed.
And in one of the worst disasters in 2014, 116 people died after a six-story building in which a well-known televangelist, Joshua TB, was preaching collapsed.

The investigation concluded that there were structural failures in the building, which was built illegally.