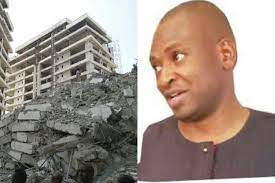 Femi Osibona, the owner of the collapsed building in Ikoyi, has been found dead by rescue workers

Touchaheart Nigeria reports that Femi Osibona, the owner of the fallen 21-story skyscraper in Ikoyi, Lagos, was found dead.

After a thorough investigation of the rubble, his body was discovered Thursday evening.

On Monday afternoon, the 21-story tower on Gerrard Road collapsed.

According to one of the survivors, the structure had roughly 100 people inside when it collapsed in.

From the rubble, 38 bodies have been found.

Nine people were hurt and had to be evacuated.

Osibona was the CEO of Fourscore Heights, the building’s developers.

In this article:21-story skyscraper in Ikoyi, CEO, Femi Osibona, Gerrard Road, has been found dead by rescue workers, Lagos, Osibona, the owner of the collapsed building in Ikoyi