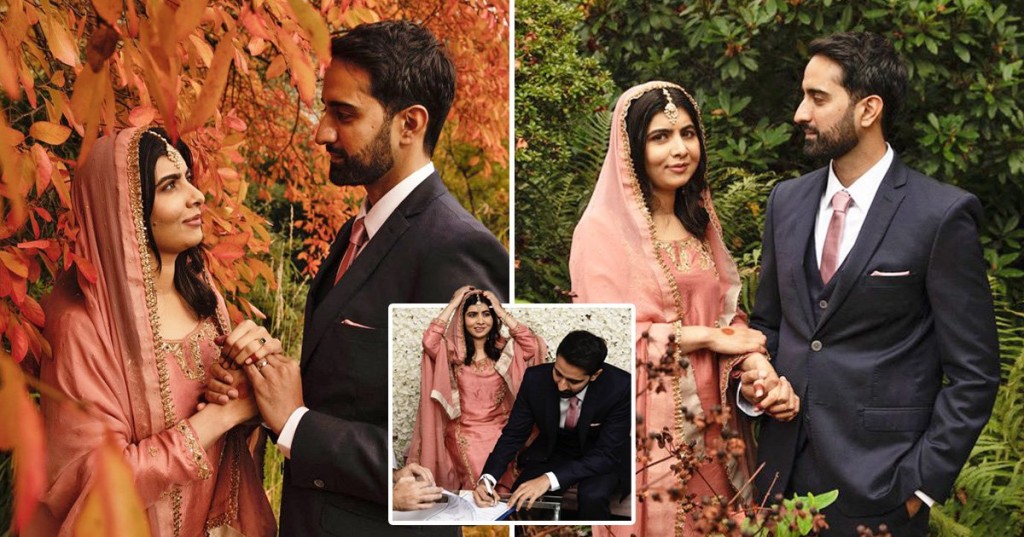 Malala Yousafzai, The Nobel Peace Prize Recipient, Married Her Boyfriend In An Islamic Ceremony In Birmingham

She and Asser Malik attended a nikkah ceremony, in which the bride and groom agree to marry.

Touchaheart Nigeria reports that the activist, who is 24 years old, described it as “a priceless day” in her life.

After being shot in the head by the Taliban in 2012, the Pakistani women’s rights activist sought safety in the West Midlands.

“Asser and I tied the knot to be partners for life,” she tweeted on Tuesday, sharing how they had taken part in a “small nikkah ceremony with family”.

“We are excited to walk together for the journey ahead,” she added.

On Wednesday afternoon, her new husband tweeted a picture of the couple and said in Malala he had found a  “beautiful and kind partner” and he was “so excited to spend the rest of our life together”.

Malala Yousafzai, now 24, was 15 when she was attacked by the Taliban in Pakistan for advocating for girls’ access to education.

Malala escaped an assassination attempt in which a terrorist boarded her school bus in the northwestern Swat valley and opened fire, injuring two of her classmates as well as Malala.

She and her family moved to Birmingham after recovering from her near-fatal injuries, which she later described as “a second home.”

She was the youngest person to win the Nobel Peace Prize at the age of 17. She moved on to Oxford University to study and is now a prominent human rights activist.

Malala has advocated for improved support for Afghan refugees, inked a deal with Apple TV+ to produce documentaries, and graced the cover of British Vogue since graduating, all while continuing to campaign to promote girls’ access to school.

Who is Asser Malik?

Asser Malik is closely associated with cricket and is the High Performance General Manager of the Pakistan Cricket Board (PCB).

A graduate of Lahore’s renowned Aitchison College and then Lahore University of Management Sciences (LUMS), he was also associated with the Pakistan Super League franchise Multan Sultans before joining the PCB, for which he prepared the player development program.

While it is not clear how long the couple have known each other, there are pictures of them cheering on Pakistan at Birmingham’s Edgbaston Cricket Ground posted on Mr Malik’s Instagram account in June 2019.

On its own, a nikkah is not legally recognised under English law and it is unclear whether the couple had a separate civil ceremony.

Malala has previously voiced her misgivings around marriage.

In an interview with Vogue in July, she said: “I still don’t understand why people have to get married.”

“If you want to have a person in your life, why do you have to sign marriage papers, why can’t it just be a partnership?” she continued.

“My mum is like… ‘Don’t you dare say anything like that! You have to get married, marriage is beautiful’.”

The news of the ceremony was liked tens of thousands of times by fans online, with thousands wishing the couple well.

Among those to offer their congratulations on Twitter were Canadian prime minister Justin Trudeau, Jemima Goldsmith and MP Sajid Javid.