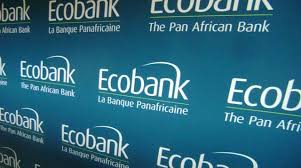 Ecobank Nigeria was the cynosure of all eyes at the prestigious Banks and Other Financial Institutions’ (BAFI) Awards 2021 held in Lagos at the weekend.

At the keenly contested awards, Ecobank Nigeria emerged winner of the “Market Confidence and Capital Structure Transaction of the Year” via its Unsecured $300 Million Bond, a fixed-rate 5-year US dollar- denominated bond launched early in the year and “Female Economic Advancement Bank of the Year” for its sustained support for female entrepreneurs and the development of savings and loans products specifically aimed at women through its Ellevate program.

The BAFI Awards backed by the BusinessDay Research and Intelligence Unit (BRIU), noted that the impressive strength and depth of the book on the Ecobank’s $300 Million Bond transaction signaled solid global investor confidence in the financial institution at a time when Nigeria was racked by a perfect storm: a COVID-19 pandemic, economic recession in the 4th quarter, and a year of falling oil prices.

It reiterated that a further proof of market confidence and demand was seen when the bonds were listed on the London Stock Exchange.

“The success also stamped market faith in Ecobank Nigeria’s prospects, as it was the second major bond sale by Ecobank Nigeria in the space of two years; the first being an oversubscribed N50 billion Tier-2 issuance in December 2020”. They stated.

“Ellevate program, which is designed for businesses owned by women, managed by women, have a high percentage of female board members or employees and companies manufacturing products for women, received special attention of the BAFI Awards Review Panel for its comprehensiveness. A fully 360º solution, it cuts across Cash Management & Collections, Liability & Loans, and Support & Development. Being an “inside-outside” award that adheres to the “charity begins at home principle,” Ecobank as winner of the Female Economic Advancement Bank of the Year Award has demonstrated a commitment to creating a work environment that allows its female employees to thrive to their full potential within the bank.

Ecobank was chosen based on the diversity and scope of Ellevate which is specifically developed for women; being a strong SME banking proposition since many women-owned and women-led businesses fall into this category; a clear, articulated vision to become a “Bank of Choice” for women through training of product development specialists, marketers, and customer service agents on the needs of women; and the service to female customers beyond providing loans, as advice and support are critical to business success anywhere in the world”.

In his comment, Managing Director, Ecobank Nigeria, Patrick Akinwuntan said: “the strong demand for our bond shows the international appetite for the Ecobank franchise in Nigeria, its unique positioning for facilitating pan-Africa trade and the attractive opportunity for the many investors seeking to back world-class Nigerian corporates.”

He also noted that “with the Elevate program, Ecobank aims to empower 40 million women, being a gender-based proposition designed to empower women-owned and managed businesses in Nigeria, as well as in the 33 African countries and beyond where Ecobank has presence.

Earlier, Publisher, BusinessDay, Frank Aigbogun, said the BAFI Awards is backed by the BusinessDay Research and Intelligence Unit (BRIU), noting that nominations for the BAFI Awards are the culmination of a rigorous review process.

He said BRIU and an independent panel of judges evaluate more than two hundred and fifty institutions and benchmark them against their global peers using several indices in a thorough evaluation process and nominees are assessed for their vision, execution, and market leading propositions.

He added that they also considered factors like corporate values, integrity, workplace culture, gender balance, and other human issues.