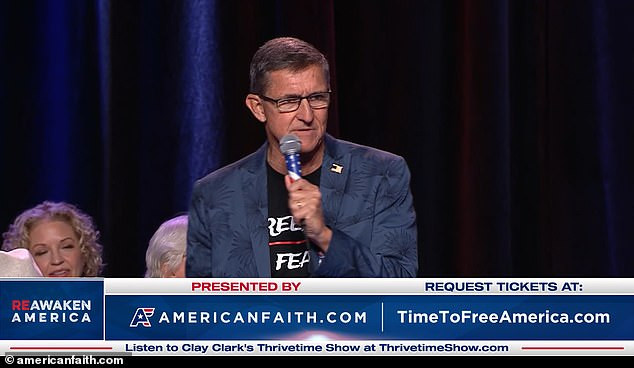 Flynn, who has pled guilty to lying to the FBI twice, made the announcement at an event attended by a slew of Trump supporters and anti-vaxx doctors. He said;

Flynn also talked about former White House chief strategist Steve Bannon, who was indicted by a federal grand jury for refusing to comply with a subpoena issued by the House Select Committee investigating the Capitol incident on January 6.

The indictment, according to Flynn, is a “abuse of freedom of speech.”

He also revealed that he has taped a program for “Tucker Carlson Tonight” about the “insurrection crucifixion,” in which he compares House Speaker Nancy Pelosi to Pontius Pilate, the man who ordered Jesus’ death in the Bible. The former NSA added;

“This is the crucifixion of our First Amendment freedom to speak, freedom to peacefully assemble. It’s unbelievable.”

Mr Flynn faced an instant backlash for his comments with critics saying he “hates the constitution” and warning about history repeating itself with the Holocaust.

“Michael Flynn hates the US Constitution,” tweeted Preet Bharara, former US Attorney for the Southern District of New York.

Fred Guttenberg, gun safety activist and the father of Parkland massacre victim Jaime Guttenberg, said that Mr Flynn’s comments proved why people need to be educated about “things like race in America and the Holocaust”.

“I am assuming when Michael Flynn tells his GQP followers we need to be a nation with ‘one religion’ he probably is not thinking Judaism,” he tweeted.

Flynn, a retired Army lieutenant general who participated in the U.S. wars in Afghanistan and Iraq, was the director of the Defense Intelligence Agency before resigning for lying to the FBI and the vice president.

He has previously spread COVID-19 conspiracy theories and stated that the United States should experience a Myanmar-style military coup.

Despite pleading guilty twice to charges related to the Mueller investigation, Trump pardoned Flynn for “any and all possible offenses” related to the probe in November 2020, while the case was still pending.