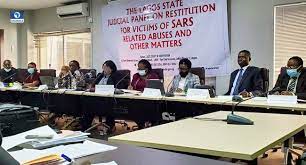 Touchaheart Nigeria reports that Police officers attempted to cover up the shooting of demonstrators at the Lekki tollgate on October 20, 2020, according to the Lagos #EndSARS panel.

The panel has heard petitions on police brutality and investigated the contentious Lekki tollgate incident in the last year.

In its report submitted on Monday, the panel said the officers deployed to the tollgate “shot at, assaulted and battered unarmed protesters”.

According to the commission, there were injuries and deaths as a result of the onslaught on protestors.

The police officers attempted to cover up their conduct by picking up bullets, according to the panel’s report.

“The panel found that the Nigerian Police Force deployed its officers to the Lekki tollgate on the night of the 20th October, 2020 and between that night and the morning of the 21st of October, 2020, its officer shot at, assaulted and battered unarmed protesters, which led to injuries and deaths,”

“The police officers also tried to cover up their actions by picking up bullets.”

According to the panel, the cleaning of the Lekki tollgate after the incident and failure to preserve the scene ahead of potential investigations proves there was a cover-up attempt.

The panel recommended the sanctioning of the officers of the army and police who participated in the “shooting, injuring and killing of unarmed protestors”.

The panel also recommended a public apology to #EndSARS protesters who were killed, injured, and traumatised by the incident.

The Federal Government had denied that unarmed protesters were killed at the toll gate on October 20.

The Minister of Information, Mr. Lai Mohammed, described the incident as a “massacre without bodies.”