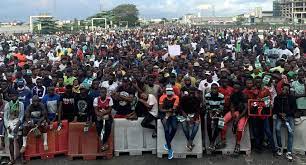 #ENDSARs:Lagos panel submits its report on Lekki Toll Gate, claims that the army killed 11 protesters and injured 24 others

At least nine people were declared deceased at the Lekki toll plaza on the night military came there to disperse #EndSARS protests on October 20, 2020, according to the Lagos State Judicial Panel of Inquiry on Restitution for Victims of SARS Related Abuses and Other Matters.

The Justice Doris Okuwobi-led panel made this public in its report handed to the Lagos State Government on Monday, according to The Punch. According to the panel’s report, titled “Report of Lekki Incident Investigation of 20th October 2020,” at least 48 demonstrators were shot dead, injured with gunshot wounds, or beaten by military.

Nine demonstrators were verified deceased, while four others were feared dead, according to the report.

The catastrophe claimed the lives of 48 people, according to the panel.

Approximately 20 of the 48 were injured by gunshots, while 13 others were beaten by the military.

The panel also noted that 96 other corpses were presented by a forensic pathologist at the Lagos State University Teaching Hospital, Prof John Obafunwa.

According to the 309-page report, the protesters were allegedly killed by policemen and soldiers.

The report read in part,

“The atrocious maiming and killing of unarmed, helpless and unresisting protesters, while sitting on the floor and waving their Nigerian flags, while singing the National Anthem can be equated to a massacre in context.

“It was alleged and corroborated that the soldiers had their vans parked at the Lekki tollgate and removed as many bodies and corpses of the fallen protesters, which they took away with their vans.”

The report negates the consistent claim by the Federal Government that there was no massacre at the tollgate, a focal gathering point during last year’s nationwide demonstration against extrajudicial killings and police brutality by operatives of the now-defunct Special Anti-Robbery Squad of the Nigeria Police Force.

The Minister of Information and Culture, Lai Mohammed, had staunchly maintained that the Lekki incident was a “massacre without bodies” and had threatened to sue the Cable News Network and another international media house that claimed otherwise.

The panel in its findings said

“the testimony of Dr Babajide Lawson of Reddington Hospital as to the nature of treatment offered victims of the Lekki Tollgate Incident in relation to gunshot wounds, which were high velocity ‘entry and exit’, all indicate injuries from military weapons, consistent with the bullet shells recovered by the panel during its visit and the witnesses that testified before the panel.”

“The panel finds corroboration of the case of gunshot wounds in the testimony of Dr Aromolate Ayobami of the Grandville Trauma Centre, where several victims of gunshot wounds were treated comprehensively and discharged.

“General Taiwo was shown video clip 202010.wa0313 of Hq81D file where protesters were shouting that the Army had shot and killed. He admitted seeing someone lying on the ground with what looked like blood, but stated that the video was fake when he did not produce his own original video on behalf of the Army.

“The testimony and report of Prof John Obafunwa, a forensic pathologist of the Lagos State University Teaching Hospital, showed that three corpses were deposited at the Mainland Hospital, Yaba Hospital, all from the Lekki Tollgate and the autopsy conducted thereon revealed death from bleeding caused by penetrating objects or rifled weapon.

“The panel finds that the fact of lack of identity of some of the other 96 corpses on the list supplied by Prof Obafunwa would not obliterate the fact that some of them could have come from the Lekki Tollgate incident of October 20, 2020 or that some other unidentified corpses may have been removed by their families or the military, as claimed by the #EndSARS protesters, far and beyond the list tendered by Prof Obafunwa.”

It found that the firing of live bullets by the Army at genuine protesters resulted in grievous injuries and the loss of lives of the protesters.

“Panel also finds that the shooting of the protesters by the Nigerian Army at the Lekki Tollgate on October 20, 2020 was unwarranted, excessive, provocative and unjustifiable in the circumstances of the state of the protests, which were peaceful and orderly.”

“disciplinary actions to the following officers (Lt. Col S. O. Bello and Major General Godwin Umelo), who refused to honour the summons of the panel in order to frustrate the investigation.

“All officers (excluding Major General Omata) and men of the Nigerian Army that were deployed in the Lekki Tollgate on October 20, 2020 should be made to face appropriate disciplinary action, stripped of their status, and dismissed as they are not fit and proper to serve in any public or security service of the nation.”

It recommended that October 20 of every year be made a “toll free day” at the plaza as long as the tollgate exists.

Governor Babajide Sanwo-Olu had said while receiving the panel’s report on Monday that he would set up a four-member committee to raise a white paper on the report.

The committee will be headed by the state Attorney-General and Commissioner for Justice, Mr Moyosore Onigbanjo (SAN), with the Commissioner for Youths and Social Development, Mr Segun Dawodu; the Special Adviser, Works and Infrastructure, Mrs Aramide Adeyoye; and Permanent Secretary, Cabinet Office, Mrs Tolani Oshodi, as members.