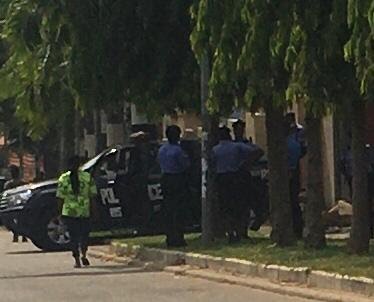 Armed operatives of the Nigeria Police Force have taken over the entry and exit points of the national secretariat of the All Progressives Congress (APC), located on Blantyre Street, Wuse 2, Abuja.

Touchaheart blog learnt that the operatives were mobilised in response to reports of a planned protest by members of the APC against the party’s Mai-Mala Buni-led Caretaker Committee, over the recently conducted ward, local government and state congresses.

Four police patrol vans, complimented by officers of the Department of State Service (DSS), have been deployed at the location to forestall a possible breakdown of law and order.

A chieftain of the party, familiar with the development, said the deployment of police to the secretariat was to protect lives and property, following a security report available to the leadership.

“APC cannot be embarrassed because this is a national government; therefore, we take measures to forestall any happening.
“We cannot underestimate the security report; we cannot play down on it. We have a security report, we can’t take laws into our hands, you can’t expect us to call thugs to defend the secretariat. The right thing to do is to inform the police and the DSS,” he said.