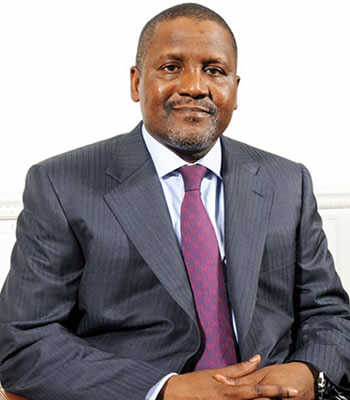 Africa’s richest man, Alhaji Aliko Dangote, on Friday, gave a chilling account of how he watched helplessly while his brother, late Sani Dangote, was dying slowly in the hospital.

The business mogul described it as ‘tormenting’ having to watch his brother give up the ghost after doctors had told the entire family who were present at his sick bed that he would give up in the next one hour.
He stated these while receiving the National Leader of the All Progressives Congress (APC), Senator Bola Tinubu, on Friday.

Tinubu was in Kano to console him on the death of his brother who was the Vice Chairman of the Dangote Group of Companies.

Dangote said, “We have always known that when there is life, there is death. We as Muslims don’t know who is next and it can be today, tomorrow or even now. That is why it is good to be good so that when you get there, you can bid for whatever you were asked to do on earth.

“I thank you all for all your prayers and your support. This will actually help us to reduce the pain that we are going through. It is a very tough time for us, it’s been very trying for especially myself, we were

“Having a brother like this, once you lose him, it is really very painful. He died in front of myself, our mother and all his children.

“The most painful thing is when you are told that your brother will be passing on in about an hour and you stand by watching as the machine was going down until it stopped working. It was very tormenting.”

While condoling the family, Tinubu said that if money could save life, Dangote would have prevented his brother from dying.

He said, “if it was possible to save late Sani Dangote’s life, a lot of money could had been spent, but death is a necessary debt that every soul must pay.”