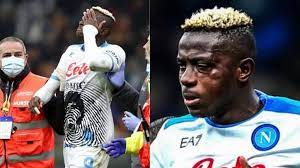 Touchaheart Nigeria reports that the Italian football club Napoli has suffered a major setback in their pursuit of the Serie A title, with star striker Victor Osimhen declared out for three months, meaning he would also miss the African Cup of Nations with Nigeria.

The attacker had surgery on his injury on Tuesday, November 23, and will be out for three months as a result, according to Napoli.

Osimhen has nine goals in 14 appearances for Napoli this season, and his absence is a huge blow for the Serie A leaders, who are now in first place on goal difference after 13 games.

‘In the operation, titanium plates and screws were employed. The athlete is doing well and will be monitored for the next few days.

With five goals in qualification for the postponed AFCON competition, the 22-year-old was joint top scorer.