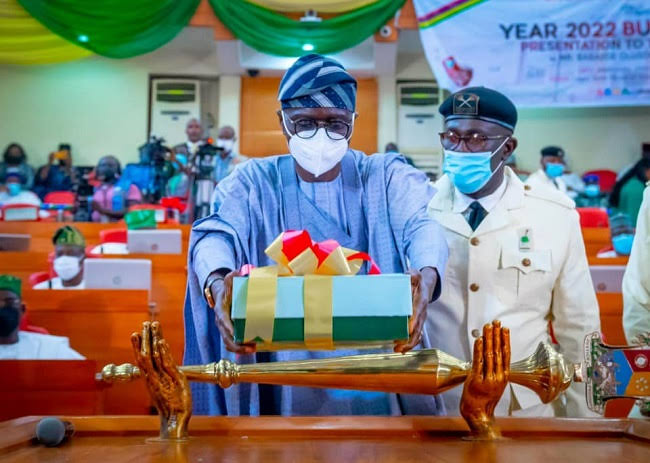 Sanwo-Olu Recommended A N1.39 Trillion Budget Of Consolidation To The legislature

Governor Babajide Sanwo-Olu yesterday recommended a N1.39 trillion Budget of Consolidation to the legislature as the 2022 Appropriation Bill, following a review of last year’s Budget of Rekindled Hope before the Lagos State House of Assembly.

Sanwo-Olu said his government would spend N325 billion on infrastructure projects in important industries to promote the economy in the proposed 1,388,285,459,990.51 Bill.

Works and Infrastructure, Waterfront Infrastructure Development, Agriculture, Transportation, Energy and Mineral Resources, Tourism, Entertainment and Creative Industry, Commerce and Industry, Wealth Creation and Employment are among the essential areas identified by the governor.

“Also, in that Q1 2021, capital expenditure amounted to N119.92 billion, representing 68 per cent performance on target.

Touchaheart Nigeria reports that “This 2022 Budget is the next step on our journey to true and sustainable greatness in Lagos State. 2022 is a year in which we will focus obsessively on completing ongoing projects, while also expanding our social intervention programs and support for citizens, and for micro and small businesses.

“Despite experiencing one of the most challenging times in modern history in our beloved state, we have advanced in a manner that ensures that conviction of our progress is incontestable.

“The results speak very eloquently in the various facets of our communities, even in the face of numerous devastating situations, which would have been acceptable justifications for underperformance.

“Lagosians can testify to the improved standard of infrastructure delivered by our administration throughout the 377 wards across the state, which aligns with the state’s mission to eradicate poverty and promote economic growth through infrastructural renewal and development.

“But we cannot afford to rest on our oars. We are therefore using this opportunity to again announce our commitment to delivering the Lagos of our dreams: Africa’s model mega city, a global economic and financial hub that is safe, secure and productive

“The 2022 budget is aimed at consolidating all our efforts so far into timely delivery of our electoral promises of a ‘Greater Lagos’ to all citizens and residents of the state. Our destination is now in sight.

“This budget projects a continuing but very gradual recovery to growth in economic activity as the global economy cautiously recovers from the impact of the Coronavirus pandemic. We have therefore approached our revenue expectations with cautious optimism.

“Lagos will continue to be at the forefront of the push for a fiscal framework that is truly reflective of the contributions and status of the constituent parts of our Federal Republic, and that empowers the units that are closest to the people to deliver the dividends of democracy more effectively.

“We, as a nation, must realise that every investment in Lagos has implications for national development, whether it is the ten-lane airport road leading from the International airport, or the Lekki deep sea port, together with the six lane Lekki Epe expressway, or the Red and Blue rail line moving 32 million commuters from Okoko and Agbado to Marina – these all serve to improve the commercial capacity of Nigeria and prepare her as a trading hub ready for the African Continental free trade area agreement.

“We no doubt have attained considerable success, while we have progressed much further than where we used to be, we are still not where we would like to be. There is still so much work to be done and we cannot allow complacency to set in.

“As we move forward, we will intensify the ongoing public sector reforms to enable better and more efficient delivery of quality service to the public with transparency, integrity, accountability and the spirit of true service.

“I urge all our workers to embrace the change that is upon us, and to constantly seek to improve on your skills, knowledge, and capacity, in the public interest.

“I assure you that we will amplify the pace and scope of our work in the days and weeks and months ahead. There lies ahead of us even more challenging roads that we must walk together if we must achieve the Lagos of our dreams. I will always remain committed to Lagosians and the Lagos project, leading from the front, communicating, welcoming, receiving counsel, and taking decisive action.

“I will strive to deliver on your hopes and aspirations, never letting you down”, he said.

House Speaker Mudashiru Obasa praised the governor for the ‘outstanding performance’ of the 2021 budget, especially in infrastructural renewal and wealth creation. He promised a speedy and meticulous vetting of the 2022 Appropriation Bill.

Describing the progress recorded under Sanwo-Olu’s watch as commendable, Obasa urged the executive arm to look inward and devise other methods of improving on the state’s IGR.

The speaker said: “While the projections of this administration are being guided by its THEMES agenda, we need to further strengthen it to touch the lives of the people.

“It is a known fact that Lagos has the highest foreign debt profile. This loan has been the secret behind most of the infrastructural developments we all see all over the state. Nevertheless, I will advise the executive to focus more on intense projects that will be geared towards alleviating poverty in our state.”

The Speaker pledged more legislative support for the executive to achieve all the outlined objectives in the proposal.