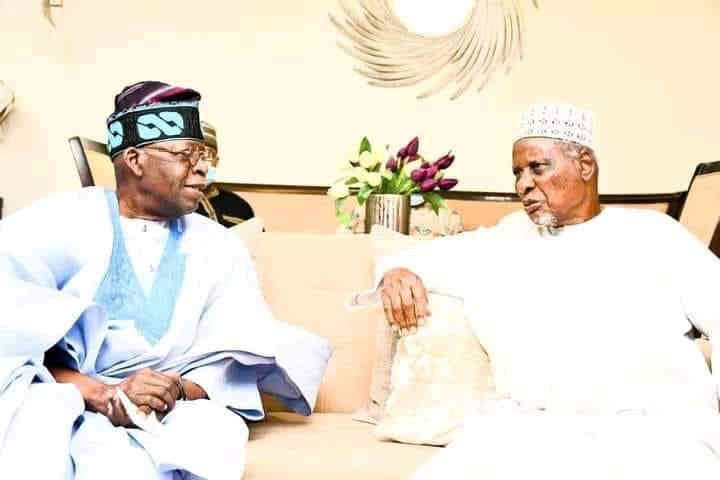 Tinubu Asks Tanko Yakasai To Back His Presidential Bid In 2023

Senator Bola Ahmed Tinubu, the national leader of the All Progressives Congress (APC), has officially confirmed the rumors that he will run for president in 2023 by soliciting the endorsement of Alhaji Tanko Yakasai, one of the founding members of the Arewa Consultative Forum and an elder statesman.

Recall that Tinubu’s secret manifesto was recently published online, and that many organisations around the country have been campaigning on his behalf, with posters and billboards of the APC national leader appearing in key towns across Lagos State and the country.

The elder statesman, Yakasai, confirmed Tinubu’s 2023 aspirations, telling Saturday PUNCH that the ex-governor of Lagos was at his Abuja mansion to beg his support for the next general elections.

On Wednesday, Tinubu paid a visit to the elder statesman at his Abuja home. Speaking on the APC leader’s visit, the elder statesman said, “He (Tinubu) just came to visit me but actually I have two of them (presidential aspirants) that I have earmarked right from the beginning and I made a vow that anyone of them who came to ask for my support first is the person I would support. Tinubu is the first person.”

96-year-old Yakasai added, “He (Tinubu) said would be contesting for President in 2023 and he asked for my support.”

Yakasai, however, said he didn’t disclose to Tinubu, during the visit, that he would support his ambition.

He also said that interested aspirants must first scale the hurdles of primary elections in their various political parties “then we will begin to compare them.”

When asked whether he planned to join the ruling party after Tinubu’s visit, Yakassai said,