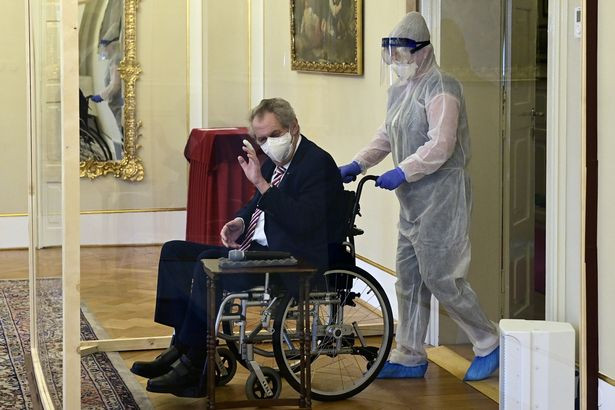 The President Of The Czech Republic, Who Is Afflicted With Covid, Appoints The Prime Minister From Behind A Glass Box (photos)

Touchaheart Nigeria reports that after testing positive for Covid, the Czech Republic’s president was compelled to swear in the country’s new prime minister from within a plexiglass cage.

Milos Zeman was photographed meeting Petr Fiala from within a cubicle during a ceremony at his home outside Prague on Sunday, November 28.

Mr. Zeman, 77, contracted Covid during a six-week stint in intensive care for unrelated ailments and was wheeled in by a medic in full protective gear.

The new government will have to tackle a new wave of Covid infections that is threatening to overwhelm hospitals and an energy crisis, after the collapse of a large electricity provider.

Mr. Fiala, who expects his cabinet to be appointed in mid-December, said: “The new government has a very complicated time ahead and many challenges… I want it to be a government of change for the future.”