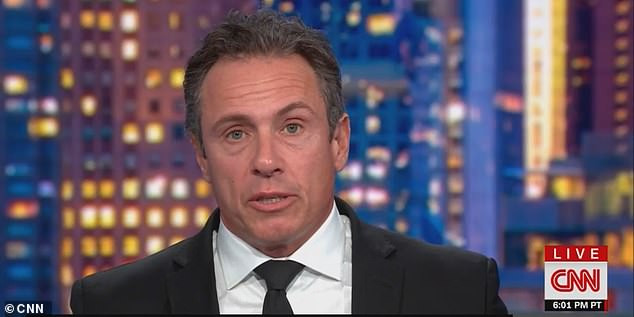 Chris Cuomo, The Embattled CNN Primetime Host, Breaks Silence After He Was Suspended

Touchaheart Nigeria reports that Chris had revealed on live that he aided his brother in his fight against the 12 women who had filed charges against him. Andrew resigned as governor of New York in August, at the age of 63.

Chris claims that he is ’embarrassed’ by the network’s suspension.

On Wednesday, December 1, Cuomo spoke publicly for the first time about his suspension on his SiriusXM radio show, “Let’s Get After It,” saying that he understood why some believe he broke journalistic ethics.

‘Quick note about the obvious,’ Cuomo told his listeners at the top of the program. ‘I’ve been suspended from CNN.’

After asking his producer to ‘cut the music,’ he launched into a monologue addressing his professional woes.

‘You know this already. It hurts to even say it, it’s embarrassing, but I understand it and I understand why some people feel the way they do about what I did,’ he said at the top of the program.

‘I’ve apologized in the past and I mean it, it’s the last thing I ever wanted to do was compromise any of my colleagues and do anything but help.

‘I know they have a process that they think is important and I respect that process so I’m not going to talk about this anymore than that. So right now let’s get after it and there is plenty to do.’

Meanwhile, Fox News host, Tucker Carlson branded Chris Cuomo an illiterate ‘buffoon’ who couldn’t speak English after he was suspended by CNN but criticized the company for bowing to pressure.

Carlson, seemed excited about the demise of one of CNN’s biggest stars, he said;

‘Like most Americans, we never actually watched The Chris Cuomo Show – assuming that’s was its name,’ the 52-year-old said.

‘But we saw clips and it transfixed us.

‘How, we wondered, how could a man who could barely speak English wind up with a paying job on television?

‘Some kind of weird affirmative action program for the illiterate?

‘We never figured it out. It was remarkable to see it.

‘Sentence after badly mangled sentence, a bouillabaisse of incomprehensible grammar – we couldn’t understand any of it.

‘It was a kind of performance art: a communicator wholly unable to communicate.’

‘He was also, in the way that buffoons tend to be, incredibly self-righteous and false.’

‘Your most basic obligation is to the people you are related to,’ said Carlson.

‘When they need your help – no matter who they are, even if you’re the governor of a state, even if they are horrible people – you help them anyway because it’s your family.

‘Chris Cuomo may be an idiot – and he is – but he understands that.

‘What a thing to be fired for.’

According to the most recent Nielsen Media Research data, Cuomo was CNN’s most-watched anchor before to his suspension, although he still trails Fox News counterparts Tucker Carlson and Sean Hannity in terms of viewership.