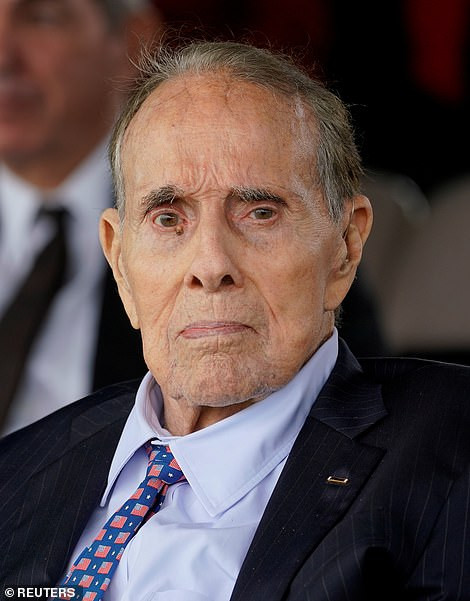 Bob Dole, A World War II hero, Died Peacefully In His Sleep At The Age Of 98

Bob Dole, former Republican senator, three-time presidential contender, and World War II veteran, died on Sunday morning, December 5, at the age of 98, according to his family.

Touchaheart Nigeria reports that Dole was a 27-year senator from Kansas and the Republican presidential nominee in 1996, losing to President Bill Clinton. He is survived by his 85-year-old wife Elizabeth and 67-year-old daughter Robin.

‘It is with heavy hearts we announce that Senator Robert Joseph Dole died early this morning in his sleep,’ the Elizabeth Dole Foundation tweeted on Sunday.

‘At his death, at age 98, he had served the United States of America faithfully for 79 years. More information coming soon.’ it added.

Dole stated in February 2021 that he had been diagnosed with stage IV lung cancer, and that he was receiving immunotherapy to combat the disease in July 2021, opting out of chemotherapy owing to its harmful effects on his body.

President Joe Biden issued a statement on Dole’s death shortly after arriving at the White House from Camp David on Sunday afternoon.

‘A month after being sworn in as President, one of the first conversations I had with anyone outside the White House was with our dear friends, Bob and Elizabeth Dole, at their home in Washington,’ Biden wrote.

‘Bob had recently been diagnosed with lung cancer, and I was were there (sic) to offer the same support, love, and encouragement that they showed me and Jill when our son Beau battled cancer, and that the Doles have shown us over the half century we’ve been friends.’ It read

Biden served as a U.S. senator with Dole for 24 years.

‘In the Senate, though we often disagreed, he never hesitated to work with me or other Democrats when it mattered most,’ Biden added