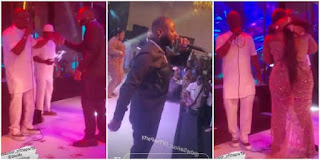 At Eniola Badmus’ Party, Davido Dances With KWAM 1, Gives Tight Hug While Spraying Both Of Them On Stage

Touchaheart Nigeria reports that top musicians such as Davido and KWAM 1 performed for the guests. Eniola Badmus made money rain on KWAM 1 after Davido sang her praises and danced with her.

Eniola Badmus, a top Nollywood actress, recently celebrated her 20th year in the industry. At the Monarch Event Centre, the movie star hosted a star-studded event that drew some of Nigeria’s biggest names.

Much-loved music star, Davido, who is a good friend of Eniola Badmus, was present at the occasion and he took to the stage to perform. In videos making the rounds, Davido stormed the stage with the celebrant and kicked off his performance with his hit song, Dami Duro.

The crowd screamed as they danced and partied hard.