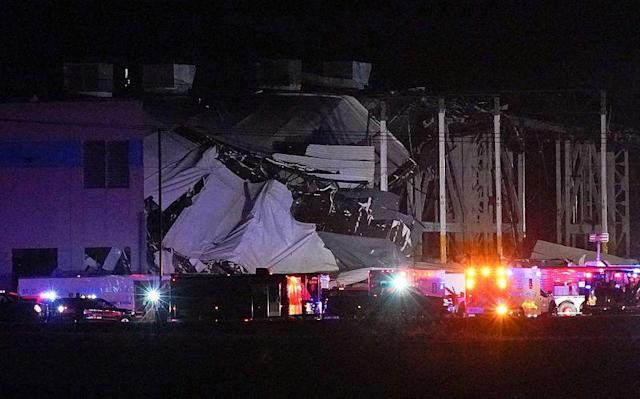 Touchaheart Nigeria reports that hundreds of workers are said to be stuck inside an Amazon factory in Edwardsville after a storm destroyed the structure late Friday night.

A search and recovery operation is now underway.

According to the Edwardsville Police Department, the warehouse collapsed around 8:33 p.m. near I-270 and Illinois Route 111.

The stepsons of an Amazon employee told FOX 2 that they are worried because they haven’t heard from him in a long time.

“Our mother is basically hysterical at this point, trying to find out what’s going on. She’s really worried. We’re worried too,” said Connor Jones.

“At this point, I’m starting to get pretty scared that he got hurt or worse.”

According to Fox 2’s Amelia Mugavero, as many as 50 to 100 personnel were reported to be inside the building. According to later reports, roughly 40 or more employees were transported to a police station after escaping the premises.

Due to the scale of the building, Mike Fillback, the department’s public information officer, said rescue efforts could take far into Saturday morning.

With the assistance of the Madison County Transit Department, some workers who managed to escape the collapse on their own were transported to a safe location.

“We were able to transport them to a safe location and reunite them with loved ones or get them assistance,” said Fillback.

“We’re still working to identify if there are still other individuals in the building and how to get through the debris in order to get them assistance.”

Several agencies throughout the St. Louis area are helping with the rescue. Authorities are also urging onlookers to avoid the area.

“Be patient with us. Our fire rescue, they’re doing everything they can, and they’ve got to do it in a safe manner,” said Fillback.

“They’re not going to leave the scene until everyone is accounted for.”

According to the Associated Press, Amazon spokesperson Richard Rocha issued the following statement on Friday night: “Right now, our primary focus is the safety and well-being of our employees and partners.” We’re looking into the problem and will update you as soon as we have more information.”

Governor J.B. Pritzker of Illinois announced on Facebook that the Illinois State Police and disaster officials were communicating with local officials in Edwardsville, and that he was keeping an eye on the situation.

“My prayers are with the people of Edwardsville tonight, and I’ve reached out to the mayor to provide any needed state resources,” Pritzker said.

It’s unclear how many people are in the building.