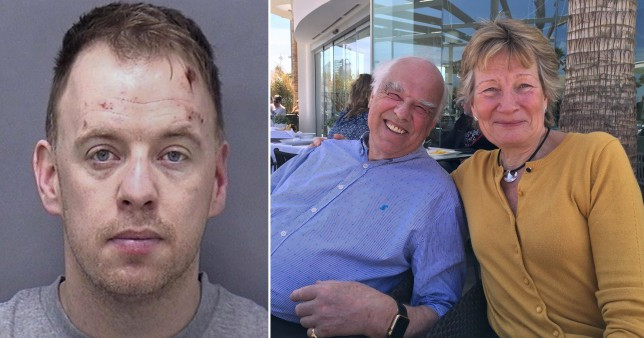 Man sentenced to 36 years in prison for murdering affluent stepfather and paralyzing mother, see why

Touchaheart Nigeria reports that Thomas Schreiber, 35, was sentenced to life in prison for murdering his affluent hotelier stepfather and attempting to murder his own mother, whom he paralyzed.

Thomas said he ‘totally snapped’ after his mum yelled at him for being ‘drunk like his father’ during lockdown at Sir Richard’s Dorset country residence.

He disclosed that he was angry with his mum for ‘abandoning’ his father, who suffered from depression. Thomas accused his mother of being a ‘gold-digging b****’ for moving in with Sir Richard, who was one of the richest men in the UK.

Despite getting a £1,000 monthly stipend and £100,000 toward the purchase of a home, Schreiber believed that Sutton treated him unfairly in comparison to his two sisters.

The court heard that family disputes had developed into violence on three previous occasions, including one in November 2020 when Sutton struck the defendant with his walking staff, shattering the cane and left Schreiber “humiliated.”

The convict blamed lockdown for deteriorating his mental health by forcing him to stay in Sutton’s estate’s “toxic pressure boiler” atmosphere.

In March 2021 he told a friend: “My mind is consumed with hatred of the very worst kind towards my family. I contemplate murdering them all morning day and night.”

Thomas Schreiber blamed the pair for his parents’ divorce in 2002 and his father’s alcoholism-related death.

He carried out a violent knife assault on his mother in their kitchen after months of telling acquaintances he had a homicidal grudge, before chasing an injured Sutton upstairs to his bedroom and slashing him repeatedly in the heart.

Anne Schreiber, who saw the sentence proceedings through videolink, had 15 stab wounds to her face, neck, and back and received 27 liters of blood during emergency surgery after being transported to a hospital in Bristol by air ambulance. She also had her spinal cord partially severed, rendering her paralyzed.

“You took a knife to our world. In doing so you took away Richard, you took away the most innocent and kindest of men in the most brutal of ways. He never stood a chance.

“You also killed our mother. You took her life away and left her trapped in a body she can’t use and is in constant pain.”

With the convict crying in the dock, she added:

“Tom, I love you but I struggle so badly with what you have done. What a waste of all these lives for a moment’s anger.”

Their sister, Louisa Schreiber, added in her statement: “I miss my mother’s touch most of all. It pains me when she asks me to put her arms around me.”

During a break in proceedings, Thomas Schreiber, sobbing, spoke to his sisters from the dock, saying: “I am so sorry, I really am. I love you.”

In a letter to the judge, Thomas spoke of his “heartfelt shame and total disgust” at his actions. He said;

“I have been a coward, hugely arrogant and selfish in my behaviour. I am so sorry for this and wish I had the clarity of thought I have now.

“This was not the actions of a demonic monster but someone in need of help and intervention.”

“This was a senseless act that has taken away the life all too early of a generous, loving, elderly man who only wanted to enjoy his twilight years.”

Thomas was also sentenced for driving dangerously when he failed to stop a Range Rover for armed police in a 135mph pursuit after the killing. When he was detained he stabbed himself in the chest and shouted at officers to shoot him.