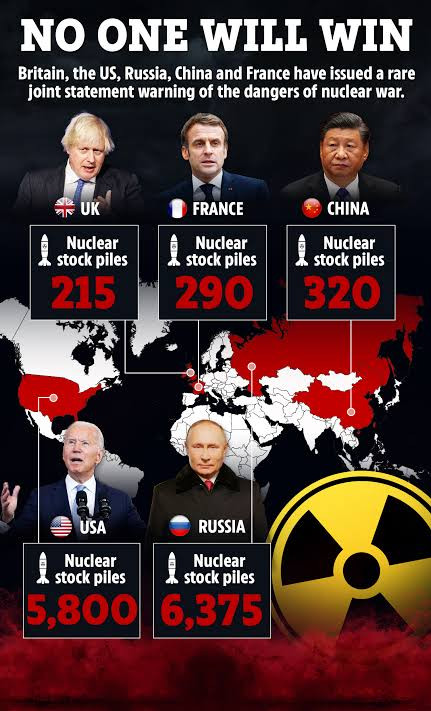 The world’s largest nuclear powers, the United States, Russia, China, France, and the United Kingdom, have committed to never engage in nuclear war, in a rare show of solidarity despite escalating East-West tensions.

Touchaheart Nigeria reports that according to the Arms Control Association, Russia is thought to have the world’s largest stockpile of nuclear weapons, with 6,255, followed by the US with 5,550. (ACA). The top five countries are China (350), France (290), and the United Kingdom (225).

Despite the fact that nuclear weapons have only been used in battle twice—in the 1945 US bombs of Hiroshima and Nagasaki—approximately 13,400 are believed to remain in our globe today, with over 2,000 nuclear tests conducted to date.

The statement also emphasized the significance of preventing nuclear-weapon states from escalating hostilities, calling it a “foremost responsibility.”

“A nuclear war cannot be won and must never be fought,” said the joint statement, which was issued simultaneously by the United States, Russia, China, the United Kingdom and France.

“As nuclear use would have far-reaching consequences, we also affirm that nuclear weapons — for as long as they continue to exist — should serve defensive purposes, deter aggression, and prevent war.”

The declaration comes as a surprise, given that Russia is massing troops along its border with Ukraine, causing concern in the United States, the United Kingdom, and the European Union, of which France is a big player.

While Chinese military action near the self-governing island of Taiwan has escalated, tensions between Beijing and Washington, as well as US allies Japan, Australia, and South Korea, have risen.

The statement released by the five powers, also known as the P5, as permanent members of the United Nations Security Council, called on all states to create a security environment “more conducive to progress on disarmament with the ultimate goal of a world without nuclear weapons with undiminished security for all.”

The five pledged to adhere to the 1970 Nuclear Nonproliferation Treaty (NPT) which obligates them “to pursue negotiations in good faith on effective measures relating to cessation of the nuclear arms race at an early date and to nuclear disarmament.”

The five-nation declaration was launched by Russia, according to Russian Foreign Ministry spokesperson Maria Zakharova, with the purpose of being released in conjunction with a review of the Non-Proliferation Treaty that began on Tuesday, January 4 in New York.

“Given the importance and self-sufficiency of this joint statement, the nuclear powers decided not to delay its publication,” Zakharova said, according to the official TASS news agency.

Kremlin spokesman Dmitry Peskov told TASS the statement “was negotiated through diplomatic channels” and “comprehensively reflects the positions of the parties and the leaders.”

“Nuclear weapons are the ultimate deterrence. They are not for war fighting. By saying that nuclear war cannot be won and must never be fought shows that this is an understanding shared by all the P5. So it is important that we have this in mind while we talk about the tension,” said Fu when asked about tensions over Taiwan.

“This applies everywhere and it applies with our bad relations with the US … This is something that we hope could reduce tension, and it would help clarify certain misunderstandings,” he added.