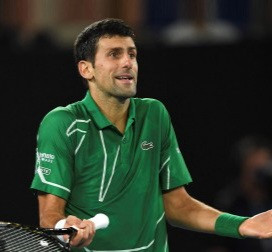 The judicial case against Novak Djokovic did not proceed as planned.

Touchaheart Nigeria reports that as users hijacked the public live stream, there were technical difficulties and even pornography being broadcasted on the broadcast.

The world No. 1 tennis player will learn out today whether he will be allowed to stay in Australia and compete in the Australian Open next week, or if he will be deported, after his visa was denied when he arrived in Melbourne last week.

Djokovic’s lawyers presented their case to Judge Anthony Kelly at 10 a.m. local time on Monday, Jan. 10, arguing that his visa should not have been denied because he had been granted a medical exemption.

The public was able to watch the court hearing online via a link, but the servers appeared to be overwhelmed by the number of individuals that logged on, as the live feed collapsed numerous times.

By 10.45 a.m., the public could finally listen in to the proceedings, but by mid-day, everything had vanished.

An outdated link to broadcast using Microsoft Teams was hijacked with obscene images and techno music at the start of the proceedings, before an alternate livestream set up by Federal Court personnel crashed when the world’s media attempted to log in.

Furthermore, some persons who had access to the hearing uploaded illegal links on YouTube, making it difficult to tell whether the streams were indeed live.

According to a court official, IT staff were working to resolve the technical issues throughout the day.

Journalist Sarah Danckert revealed how the court employee in charge of hosting the link struggled to keep up with muting people who joined the broadcast, resulting in random members of the public behaving as they pleased.

Djokovic’s lawyers argued that he had met the standards outlined by Australia’s advisory board on immunisation after being granted a medical exemption by Tennis Australia, and that he had also provided evidence of the exemption to Border Force personnel during the morning session.

Judge Kelly acknowledged the steps Djokovic took, saying: “The point I’m somewhat agitated about is what more could this man have done?”

The government would claim that the visa cancellation was valid and that Djokovic’s recent case of Covid-19, which he contracted on December 16, did not justify his refusal to be vaccinated.

Although Djokovic has not made his vaccination status public, players must get inoculated in order to compete in the Australian Open.