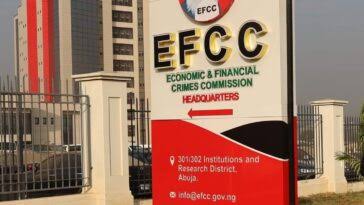 The ongoing trial of one Stanley Okafor and Larbrador Shipping Services Limited before Justice O.A. Taiwo of the Special Offences Court sitting in Ikeja, Lagos for an alleged $111,500,000 fraud continued on March 3, 2022 with the Economic and Financial Crimes Commission, EFCC, presenting its third witness.

Okafor, who was first arraigned on November 26, 2021, is facing a 12 counts bordering on possession of false documents, forgery, attempt to obtain by false pretence, and using as genuine a false document contrary to Section 364 of the Criminal Law of Lagos State 2011.

One of the counts reads: “OKAFOR STANLEY and LARBRADOR SHIPPING SERVICES LTD, sometime between November 2019 and January 2020 in Lagos, within the Lagos Judicial Division, with intent to defraud, did attempt to obtain the cumulative sum of $111,500,000 (One Hundred and Eleven Million Five Hundred Thousand Dollars) from Zenith Bank Plc by falsely representing that CitiBank was already in receipt of the said sum on your behalf.”

Another count reads: “OKAFOR STANLEY and LARBRADOR SHIPPING SERVICES LTD., on or about the 21st day of November 2019 in Lagos, within the Lagos Judicial Division, with intent to defraud and in order to facilitate your obtaining by money by false pretence from Zenith Bank Plc forged a document to wit: Bank of America confirmation message with SWIFT TRANSACTION CODE BOA-20192111700088368, purporting it to represent the sum of $22,000,000 (Twenty-two Million Dollars) in favour of Labrador Shipping Services Ltd, which document you knew to be false.”

He pleaded “not guilty” to all the counts prompting the commencement of trial.

At today’s proceeding, the witness, Olugbemileke Akinkunmi, Head, Funds Management Office of the Central Bank of Nigeria (CBN), testified as to the authenticity or otherwise of the said SWIFT message documents traced to the defendant.

Led in evidence by the prosecuting counsel, E.E. Iheanacho, the witness told the Court that his schedule of duties included monitoring payments and receipts of foreign currencies into bank accounts via the SWIFT Network.

Describing the SWIFT Network as a secure computer network connecting more than 10,000 banks, he told the Court that the EFCC in November 2020 wrote to the CBN to verify the genuineness or otherwise of the said SWIFT message documents.

He said: “The EFCC wrote to the CBN to verify the authenticity or not of some SWIFT correspondences.

“My Director minuted it to me to give my expert opinion.

“I reviewed the attached SWIFT copies and the summary of my review was that the SWIFT messages were not authentic.”

He thereafter identified the response of the CBN to the EFCC inquiry as Exhibit
B, and the EFCC letter to the CBN as Exhibit C.

The prosecution, thereafter, sought to tender through the witness an authentic copy of a SWIFT message, but the defence raised objection.

The objection was, however, overruled by Justice Taiwo who held that the document was relevant, as the case involved allegation of forgery.

It was thereafter, admitted in evidence as Exhibit E.

In his examination-in-chief, the witness, further analysed the SWIFT documents traced to the defendant and pointed out physical features on the face of the document, which indicated that it was not authentic.

In this article:EFCC, Stanley Okafor