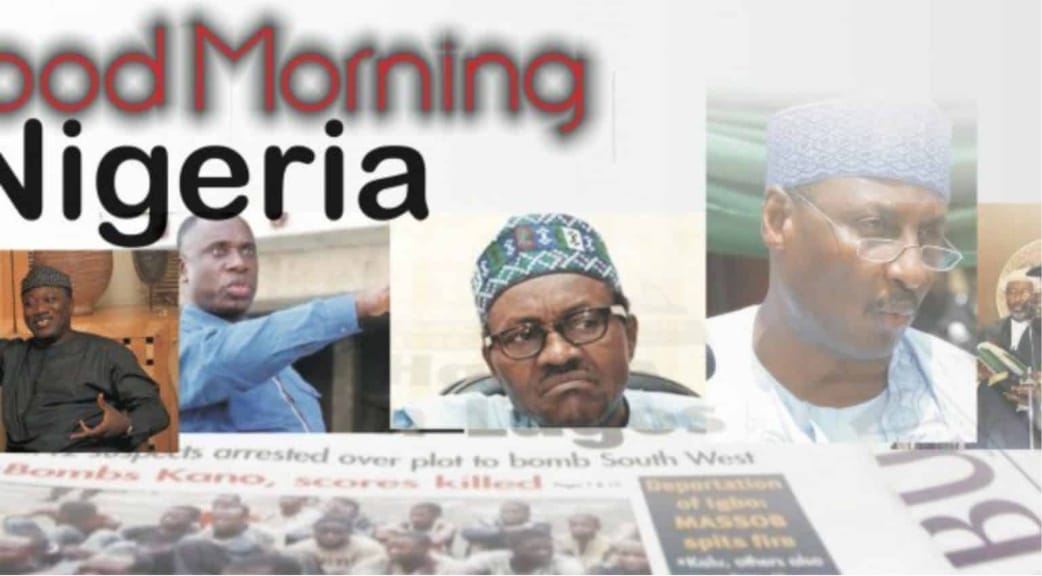 The following are today’s newspaper headlines and Naija news from Nigerian newspapers.

1. On Thursday in Kano, President Muhammadu Buhari said his government would deal with those profiting from the country’s fear and insecurity. He addressed at the Nigeria Police Academy’s Regular Course 4/2016 Cadets’ Passing Out Parade in Wudil, Kano.

2. Mr. Ibrahim Lawal, the Special Adviser on Media and Publicity to detained House of Representatives member Farah Dagogo, has expressed his displeasure with his principal’s continued detention. In a statement released in Port Harcourt on Thursday, Lawal said Dagogo, a Peoples Democratic Party governorship candidate, was unjustly detained after he was “unlawfully declared wanted by Governor Nyesom Wike.”

3. The Indigenous People of Biafra has warned criminal elements in the South-East not to use its name to commit crimes. The secessionist movement distanced itself from the criminals, claiming that it was never a part of or responsible for the region’s continued insecurity and criminality.

4. Operation Yaki, a joint operation between the Special Tactical Squad and the Kaduna State security apparatus, has killed four suspected bandits along the Saminaka-Jos expressway. Mohammed Jalige, the spokesman for the Kaduna Police Command, made the announcement in a statement on Thursday.

5. The opposition Peoples Democratic Party (PDP) has named Delta State Governor Ifeanyi Okowa as the running mate of Atiku Abubakar, the party’s presidential candidate. Atiku made the announcement at the party’s headquarters in Abuja on Thursday.

6. The Ohanaeze Ndigbo, the Igbo apex socio-political organization, threatened yesterday to punish the opposition Peoples Democratic Party, PDP, for failing to consider the Southeast when choosing Atiku Abubakar’s running mate. The threat was contained in a statement by the Secretary-General of Ohanaeze, Mazi Okechukwu Isiguzoro.

7. On Thursday, the Benue State Police Command announced the arrest of four suspects in connection with the recent attack and killing of some residents in Okpokwu. Suspected herdsmen invaded Igama hamlet in the state’s Okpokwu LGA, killing around 30 people and setting fire to many homes.

8. The Catholic Diocese of Enugu has condemned Rev. Father Ejike Mbaka, a Catholic priest and the founder of Adoration Ministry Enugu, for making inflammatory political remarks against Peter Obi. In a statement issued on Thursday, the Auxiliary Bishop of Enugu, Rev Ernest Obodo, criticized and distanced the church from the sentiments.

9. There was commotion at the All Progressives Congress (APC) national secretariat in Abuja yesterday, as a group of youths stormed the premises, chanting slogans against Senator Abdullahi Adamu, the party’s national chairman. While a meeting of the National Working Committee (NWC) was in place, a group of youths from Kogi State invaded the party’s headquarters.

10. Idi Barde Gubana, the Deputy Governor of Yobe State, has lost another child, his 16-year-old daughter Khadija Idi Barde (Siyama), who was injured in the same accident that killed her brother. On Saturday, a vehicle carrying the deputy governor’s children was involved in an accident on the Maiduguri-Kano route.