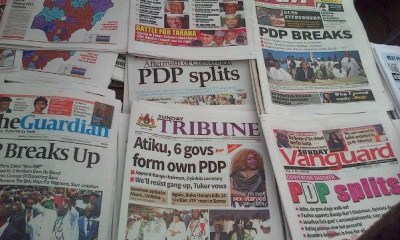 Good morning! The following is a list of today’s top Naija News headlines from Nigerian newspapers:

1. In response to a request from the House of Representatives to extend the voter registration deadline, the Independent National Electoral Commission (INEC) has agreed to deploy additional machines and ad hoc staff.

2. The 26th Commonwealth Heads of Government Meeting (CHOGM), which will take place from June 20 to 26, 2022, will be attended by President Muhammadu Buhari. He will leave Nigeria on Wednesday for Kigali, Rwanda. Femi Adesina, the president’s special adviser on media and publicity, revealed this on Wednesday.

3. The Nigerian National Petroleum Corporation, or NNPC, has been granted a monopolistic advantage. Oil marketers have urged the Federal Government to end this privilege. The importation and supply of petroleum products into the nation are currently monopolized by NNPC. However, oil marketers claimed that the current state of the market was making things worse for the nation.

4. The Labour Party, LP, announced yesterday that Senator Rabiu Musa Kwankwaso of the New Nigerian Peoples Party, NNPP, and Mr. Peter Obi, the party’s presidential candidate, are still negotiating to run on a joint ticket in the 2023 presidential election.

5. Yesterday, armed robbers attacked Estate Gardens on Airport Road in Abuja and robbed tourists of their cash and valuables. A resident, Ezenwa Alfred, said the robbers, who were six in number, invaded the garden beside the headquarters of the Nigeria Union of Teachers (NUT), around 8pm on Monday and shot sporadically before robbing people.

6. According to Femi Fani-Kayode, a former minister of aviation and top APC official, 22 more senators from the ruling All Progressives Congress (APC) intend to join the Peoples Democratic Party (PDP). He claimed that the Senators’ intended defection stemmed from their being excluded off the party’s ticket to run in the elections of 2023.

7. Benue State Governor Samuel Ortom stated on Wednesday that it was getting harder to pay employee salaries. On Wednesday, Ortom provided three explanations for the development in response to questioning from journalists in Makurdi, the State capital.

8. Abdullahi Adamu, the National Chairman of the All Progressives Congress (APC), has expressed concern over the wave of party defectors. After failing to obtain the APC’s nomination for the 2023 elections, seven senators switched to other opposition parties.

9. On Wednesday, Rivers State Governor Nyesom Wike received a visit from Labour Party presidential candidate Peter Obi at Wike’s Port Harcourt home. When he arrived, Obi was led inside for a private audience with the governor.

10. Bola Tinubu, the presidential candidate for the All Progressives Congress (APC), has made hints about ongoing consultations with Kabiru Masari, the vice presidential nominee for the party, party governors, and President Muhammadu Buhari. According to him, Masari might resign if it helps the party win the 2023 presidential election.

Here is a list of today’s top Naija News stories from Nigerian newspapers. On Touchaheart Nigeria, you can read more news about Nigeria, Africa, and the world. I’ll see you tomorrow.