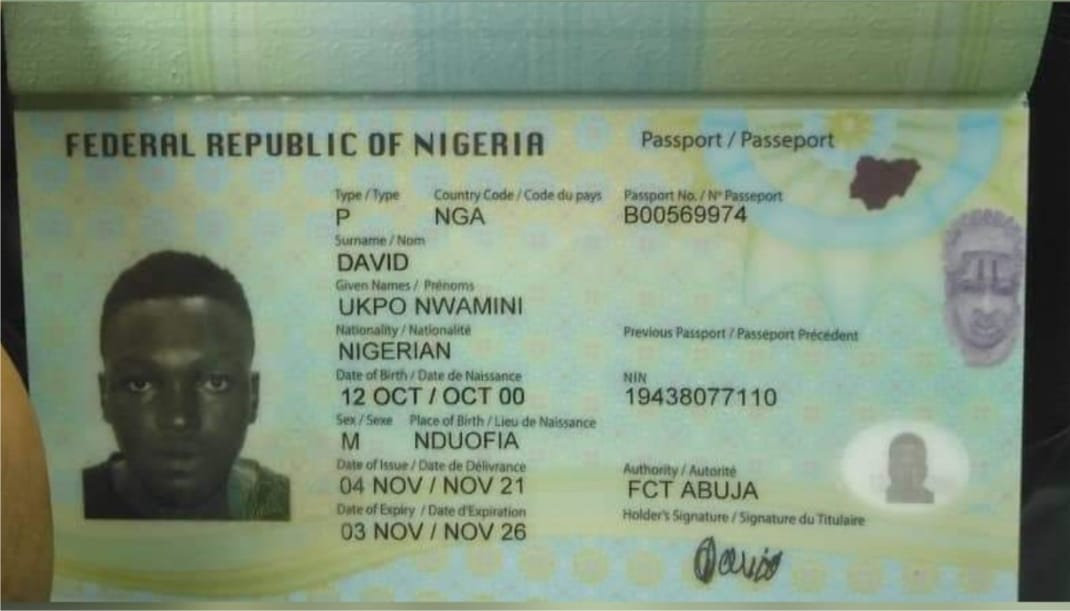 David Ukpo Nwamini’s passport has surfaced, revealing his age to be 21. He is the young man who was supposed to donate a kidney to Sonia Ekweremadu, the daughter of Ike Ekweremadu, the disgraced former deputy senate president.

Nwamini was born on October 12, 2000, according to details on the data page of his international passport seen by THE WITNESS and provided by Ekweremadu in an introductory letter in the medical visa application submitted to the British High Commission in Abuja, the nation’s capital.

His passport’s issue date is November 4, 2021, while his actual birthdate is October 12, 2000. This puts the age of the passport holder in question at 21.

However, under British law, being over 18 is not sufficient to qualify as an organ donor because the Ekweremadus will also need to deal with the issue of consent.

However, there would still be concerns about whether the age listed on the passport actually matched his actual age.

Ekweremadu and his wife Beatrice were detained earlier this week by UK officials, and on Thursday they were charged in the UK with conspiring to arrange the trip of a child, trafficking in children, possible modern slavery, and organ harvesting.

On Thursday afternoon in London, the couple appeared in court; bail was declined.

But in a fresh twist, a letter that accompanied the visa application of Nwamini, alleged to be a 15-year-old homeless child showed that Ekweremadu informed the UK authorities that he was taking the person abroad for a kidney transplant for his daughter.

The document showed that Mr. Ekweremadu applied for a visa for Nwamini on December 28, 2021.

“I am writing in support of the visa application made by Mr. Ukpo Nwamini David who is currently having medical investigations for a kidney donation to Ms. Sonia Ekweremadu.

“David and Sonia will be at the Royal Free Hospital London, and I will be providing the necessary funding. I have enclosed a statement of my bank account,” the letter said.

A close source to the Ekweremadus said that the PDP senator was not involved in any organ trafficking.

“Senator Ekweremadu has a daughter who needs a transplant. A willing donor was seen in Nigeria and travel preparations were made. He did write to the British High Commission, explaining the situation. The donor traveled to the UK with the patient. The donor is a 21-year-old man and not a girl. He is not a minor. As it happened, the organ did not even match. Not wanting to return to Nigeria, the donor went to report that he was trafficked to London for possible organ harvest, believing same would guarantee him asylum.” the source said.