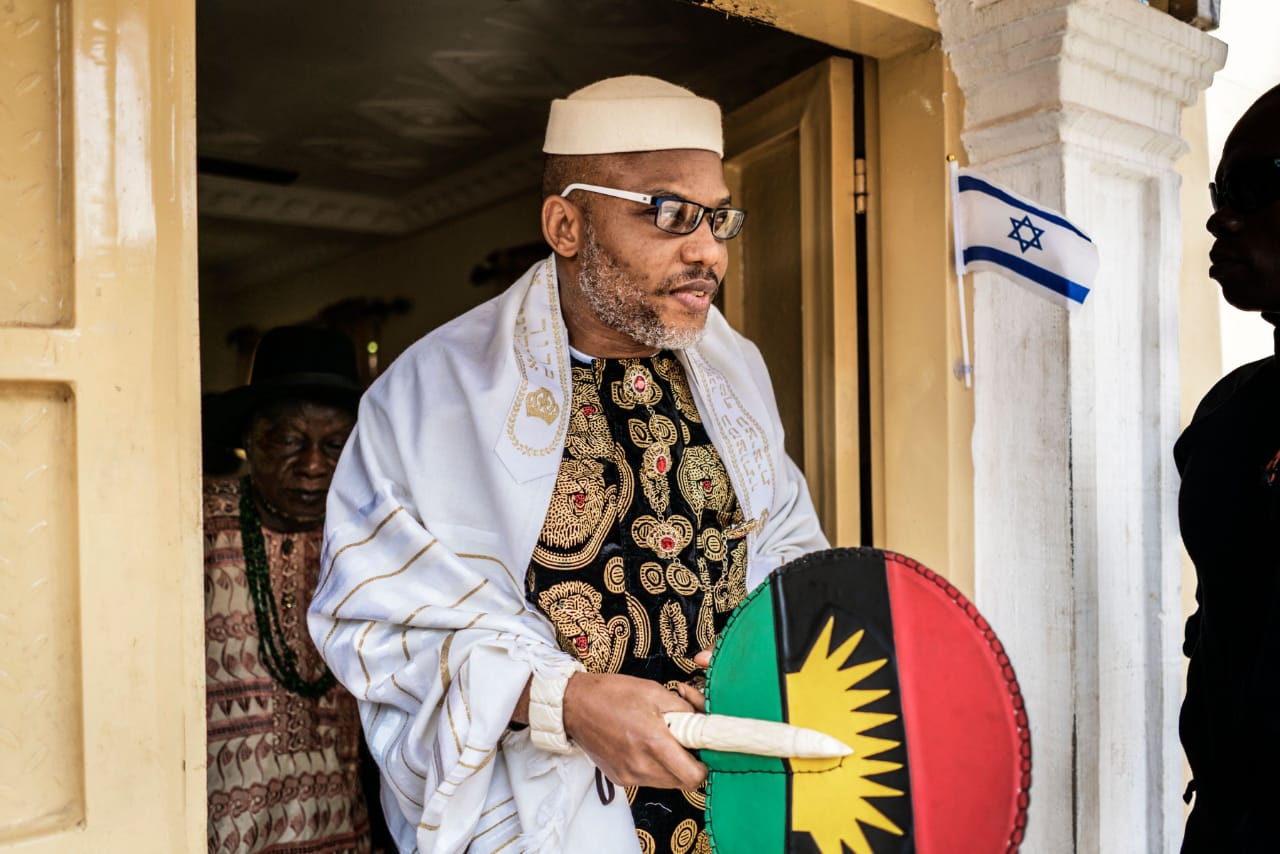 Obsession With Nnamdi Kanu- The SUN

The president of Nigeria, Maj. Gen. Muhammadu Buhari, is deserving of sympathy or pity—or both—concerning the Indigenous People of Nigeria (IPOB) and its leader, Mazi Nnamdi Kanu. Ask him a question about IPOB and Kanu, then sit back and watch the contortions in his face and the twitching signifying the messages emitting from his legendary body language. He has led Nigeria backward by more than 30 years in just seven years of his presidency.

Just in case you have forgotten, Buhari’s hailers at the inception of his presidency in 2015 told us that the man is taciturn and does not talk much but that we should quickly learn the fine art of reading the body language of the then “new sheriff in town.” Trust Nigerians. We trust easily. And unquestioningly. And we obey wholeheartedly. How could we have not? Prior to the elections of 2015, Nigerians were yearning and yawning for a messiah to spring them from the feeble and enfeebled hands of a “clueless” President Goodluck ‘Ebele’ Jonathan, an associate Igbo man and the band of bandits in the then ruling Peoples Democratic Party [PDP].

At that time, if the public electricity supply remained on in your neighborhood for ten hours without interruption, it wasn’t because of the hard work of the electrical workers or even luck; rather, it was owing to the newly elected President, Gen. Buhari’s body language. If a whistleblower exposed wrongdoing, it was not because of the reward that would follow, but rather the “no-nonsense” Army General’s body language that prompted and encouraged the whistleblower to speak up. Similar credit for a slight decline in inflation and a negligible increase in the Gross Domestic Product (GDP) belongs to the president’s ubiquitous and magical body language.

It was the same every time the armed forces won a battle against sectarian rebels in the country’s embattled northeast, where the Islamist groups Boko Haram, Ansaru, and ISWAP had long imposed a blockade. Our ears were assaulted with and filled with songs about a new sheriff in town who was annihilating militants, rooting out corruption, reuniting IDPs with their families, and giving desperate Nigerians hope for a better tomorrow—all without lifting a finger.

A Daniel had reached his conclusion at last. No. The long-anticipated Messiah has come. During the mirage, several Nigerians acted like “drunken sailors.” By the way, you couldn’t have forgotten that this moniker was created by Buhari and his All Progressives Congress [APC] marauders and insurgents in 2014, just before the elections in 2015. Buhari then successfully hung it on the neck of the then-President Jonathan and his ruling PDP. However, it must be acknowledged that a few astute folks saw through the ruse and maintained their composure. Others intervened and warned of the negative effects of the prevalent growing herd mentality. However, their situation involved a voice in the wilderness. As we say in Nigeria – How market?

But for the danger of dealing with a person who does not or who seldom talks, Nigerians, certainly the Igbo, would have been better off with a dumb president. Whenever Gen. Buhari talks, he spews hate, dislike, division, and tension. When he acts he exacerbates the country’s fault lines through nepotistic appointments and sundry actions. The high point of Buhari’s first, and I verily believe only, live Media Chat in December of 2015 was the question he posed to Nigerians – What do the Igbo want? The question was not borne out of the altruistic desire to heal and reconcile the various nations in Nigeria. Rather it was to spite the Igbo and to remind them that they are powerless.

Buhari persisted in speaking from the richness of his heart at every chance. In his promise to deal with individuals who cast five percent of their votes for him in that year’s presidential election, he mentioned depriving Ndigbo of their due in the United States of America in 2015. Buhari brought up IPOB and Kanu once more in his recent conversations with the UK Prime Minister Boris Johnson and the American news agency Bloomberg. He kept himself busy advocating for the international community to label Kanu and IPOB as terrorist organizations. He is currently bothered by Kanu’s fixation. For instance, he justifiably contends that Kanu will only be granted a respite following the court’s ruling. But Gen. Buhari knows that his regime is not interested in prosecuting Kanu. Or how do you explain the whimsical amendments of charges preferred against the suspect since his apparent extraordinary rendition reportedly from Kenya.

Gen. Buhari ought to be aware by now that Nigeria’s misguided and poorly digested labeling of IPOB is of little relevance to the international community. Self-determination movements on their own are not illegal. Before the security agencies became overzealous and trigger-happy in response to reports of shooting and killing unarmed protesters, IPOB was a nonviolent organization. However, violence breeds violence. Such incidents are frequently reported, as Amnesty International and other regional organizations have shown.

Despite the publicly stated reasons for forming the militia, nothing we have written can be interpreted as endorsing IPOB’s eventual ill-advised behavior regarding the Eastern Security Network (ESN). Such a blatant challenge to a government’s authority is unheard of. It is worse when the affront was coming from a section that suffers favour deficits.

It makes no difference that the same dictatorship took a very long time to label the homicidal bandits as terrorists and has refused or neglected to do the same for the ravaging and murderous herdsmen up until this point. It’s possible that various people will respond to this differently.

In his fourth attempt, Gen. Buhari pledged to combat corruption, ensure economic growth, and combat insecurity. We will provide you with three examples of the regime’s fundamental promises, and you may decide for yourself. In the seven years that Buhari has been in office, the GDP has grown by 1% on average. And during that time, the economy had two recessions, with a third one possibly looming before he leaves office on May 29, 2023.

Nigeria with a population of about one-sixth of India’s struggles with the Asian country for the world’s capital of poverty.

On Buhari’s performance on security, we will quote excerpts from a statement issued on Sunday by the Commissioner for Information in Zamfara state, Ibrahim Dosara. He said: (Zamfara state)’’Government has henceforth, directed individuals to prepare and obtain guns to defend themselves against the bandits, as the government has directed the state commissioner of police to issue a licence to all those who qualify and are wishing to obtain such guns to defend themselves’’. He added that indigenes and residents should apply to the commissioner of police for ‘’licence to own guns and such other basic weapons to be used in defending themselves’’. What further evidence do you need to be convinced that the regime has failed on this core mandate. Zamfara is not the first nor the only state government to pass a vote of no confidence on the central government.

On the war on corruption this regime removed any veneer of seriousness or fidelity to the project when about two months ago it suddenly pardone two former governors who were jailed for stealing.

The highlighted issues are the areas you would expect a serious leader to be obsessed with and to have passion for. But not Gen. Buhari, a man who has devalued Nigeria’s Presidency by treating it as a prize to be won, not a call to a sacred duty.