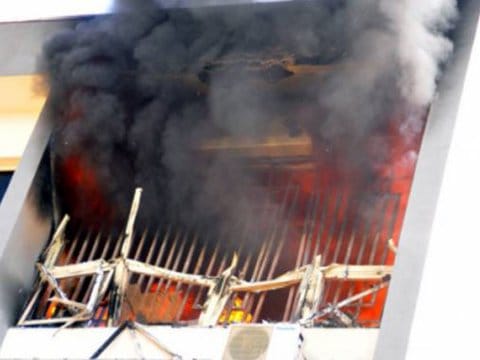 The INEC office has been set on fire by hoodlums.

This online news source reports that the INEC office, which is located at the council’s Ogurute headquarters, was set on fire late Sunday night, July 3, 2022, and the afflicted building was completely burned down.

It was discovered that the state fire service, which has an office in Ogurute, was unable to intervene to stop the situation from getting worse until security was put in place.

According to reports, the structure had been entirely destroyed by the fire by the time security was offered.

The two fire engines from Nsukka and Ogurute barely managed to stop the fire from spreading to neighbouring offices, it was discovered.

Meanwhile, Touchaheart Nigeria reports that Igboeze North and its neighboring Igboeze South LGA were recently attacked by unidentified gunmen, which prompted the state government to impose a 6 pm to6 am curfew and restrict commercial motorcycle riders in the affected LGAS.

Since the commencement of violence in the area more than a month ago, there has been a significant security presence in the area to stop the ongoing attacks, but the conflict has persisted.