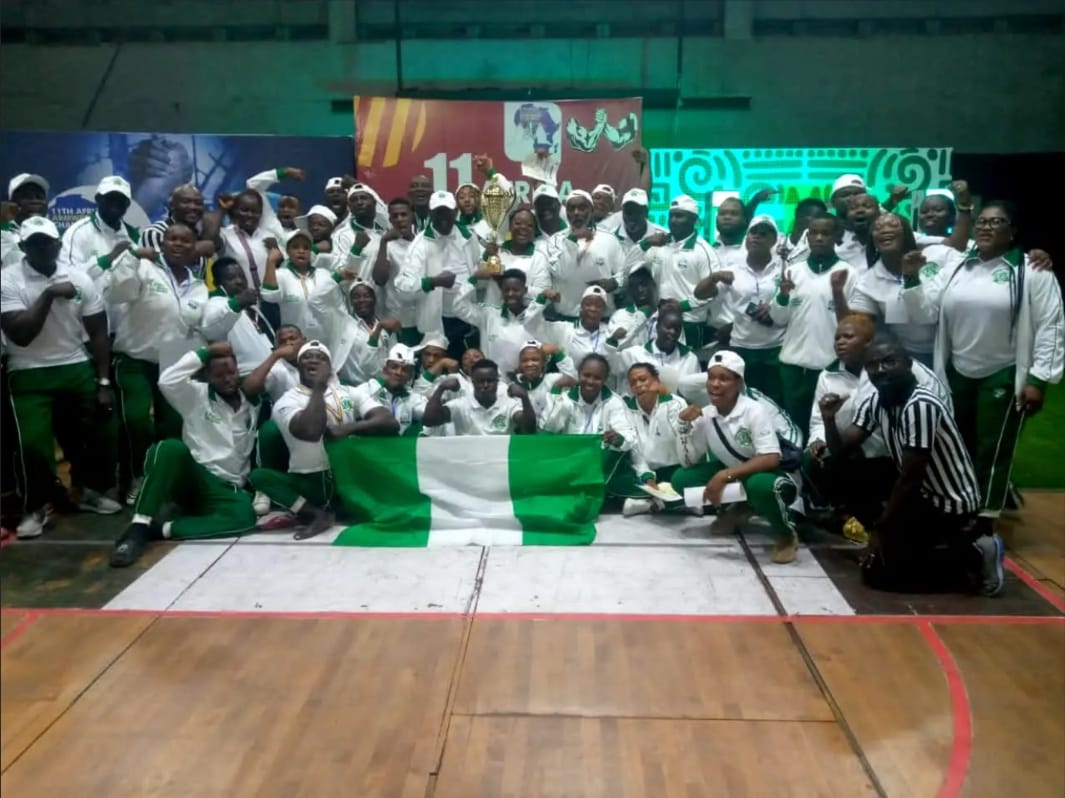 Nigerian teams took home 27 gold, 27 silver, and 22 bronze medals from the three-day competition held at the National Stadium in Surulere, according to the News Agency of Nigeria (NAN).

No less than 45 armwrestlers competed to produce the outcomes, making Nigeria’s resounding performance their best thus far in the competition.

Egypt, which used only six armwrestlers to achieve its results, finished in second place with 24 gold medals.

To the delight of the coach, Ghana took third place, winning 18 gold, 22 silver, and 5 bronze medals.

A total of 12 nations took part in the competition, which began on July 19 and ended on July 22.

The competition was successful, according to Charles Asibey, president of the African Armwrestling Federation, in an interview with NAN.

He claimed that everything went as planned and expressed optimism for the future of sport in Africa.

“Only five countries participated when Nigeria last hosted but now we have 12 countries show that the sport has grown tremendously.”

“This is a big development and we are so proud that the sport is now gradually lifting from the ground and gaining good acceptance.

“Armwrestling is a great sport with good techniques and it takes a lot of hard work and tactics to achieve set objectives.

“We are proud of what we have seen today, especially from countries who are also participating for the first time indeed it is a great moment in the history of the sport,” Asibey said.

He added that Ghana will host the 12th edition in 2023 where the competition would be used as qualifications for the All Africa Games which are also held in Ghana.

He said that the essence of hosting the competition was to create more awareness for the sport to be a scoring sport at the coming Nigeria Sports Festival.

He said that the sport had grown sporadically and it cannot be termed as a lesser sport again, urging corporate bodies to invest in the success story.

“We are going places with armwrestling and we can only grow, indeed hosting and winning is a plus that can not be ignored.

“We move on to the next level which is the coming National Sports Festival coming up in Delta, where we hope to showcase the sport as a demonstration sport.

“The overall target is for the Honourable Minister of Sport, Sunday Dare to recognize the sport so that we can. Particpate at the next Africa Games in Ghana,” he said.

Becky Ademoh, the National Team coach, told NAN that the team had worked hard to achieve the results.

She said that the team was well motivated and no fewer than 15 young athletes were discovered to join the aging ones.

“Indeed the result was as a result of their determination to succeed and a sign of good things to come in the future,” she said.

NAN reports that Cameroon, Togo, Benin, Madagascar, Senegal, Cote d’Ivoire, Guinea Conakry, Somalia, and Niger were among other countries that took part in the competition. (NAN)