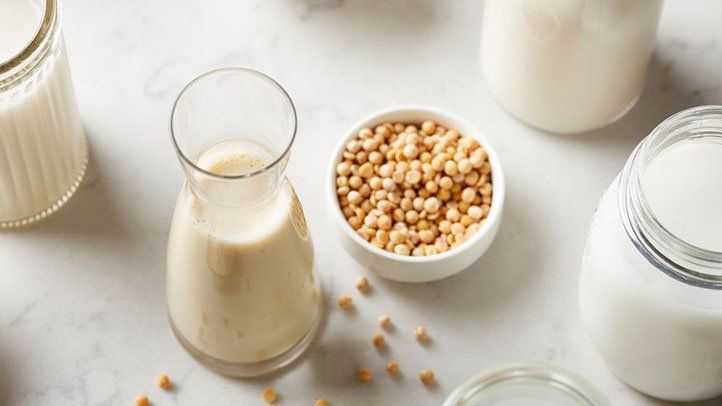 All You Need To Know About Soya Milk Ingredients, Methods, Benefits

Soya milk is a traditional vegetable protein beverage, which is made from whole soybeans. It is originated in China and is now becoming more and more popular in the diets around the world.

As it is named “soya milk,” its protein content is close to that of cow’s milk.

Soy milk is also well-known as dairy milk replacement, but it’s not just a substitute ingredient.

Soy milk can be a worthwhile addition to your diet on its own.

Also good for those who are lactose intolerant.

Soak soybeans in 2-3 cups of water overnight. This will soften the soybeans and get them ready for blending.

Discard water and rinse soybeans. We want to get rid of any of the dirt or contaminants that were on the beans themselves.

Remove skins as best you can. You can rub the beans by hand while they’re underwater.

The released skins will float to the top and can be skimmed off. Don’t worry if you can’t get them all. Blending the beans will release all that soy nutrition.

Add soybeans and 4 cups water to a blender.
Blend until smooth.

This step exposes the entire bean to the water, ensuring we wring all the nutrition we can from these beans for our homemade soy milk.

Our testing has led us to these organic cotton nut milk bags. They are great balance of tightly woven cloth that keeps the pulp inside, porous enough to let the milk flow freely, tough enough to withstand multiple milkings, and with a tie-close top that prevents blowouts.

Heat the strained milk in a heavy-bottom pan to 212ºF (100ºC). Hold this temperature for 20 minutes, stirring frequently to prevent sticking.

Cool the milk and store.

This is an important step since, as a legume, soy can’t be consumed raw.

Refrigerate up to 4 days.

This healthy, flavorful beverage first came about as a waste product on the way to making tofu.

Today, soy milk can be found around the country as a lactose-free dairy substitute with health benefits that are all its own.

Benefits Of Soy Milk In The Body:

The vitamins, minerals, and antioxidants in soy milk can provide important health benefits. For example, the forms of vitamin B found in soy milk are important for helping your body maintain your nerve cells and DNA.

They can also help you avoid certain forms of anemia, which can prevent tiredness and fatigue.

Soy milk is also high in protein. The protein in soy milk is healthy, plant-based, and can help support healthy muscles and organs.

Soy milk can also help support your cardiovascular system. Soy milk is an excellent source of potassium, whether or not it has been fortified.

Potassium is deeply connected to maintaining lower blood pressure and a regular pulse. Furthermore, soy milk has been linked to lower cholesterol levels, especially in people who have high cholesterol.

Soy milk contains isoflavones, which are a class of chemical known as “phytoestrogens.”

These isoflavones react in the body like a weak form of estrogen. Because of that, studies have shown that consuming soy milk and other soy products might help reduce the symptoms of menopause, such as hot flashes.

Most soy milk found in supermarkets and health food stores is fortified with added nutrients.

This makes fortified soy milk a great source of calcium, which is the most common mineral in your body.

Consuming enough calcium can help strengthen your bones and reduce your risk of osteoporosis.