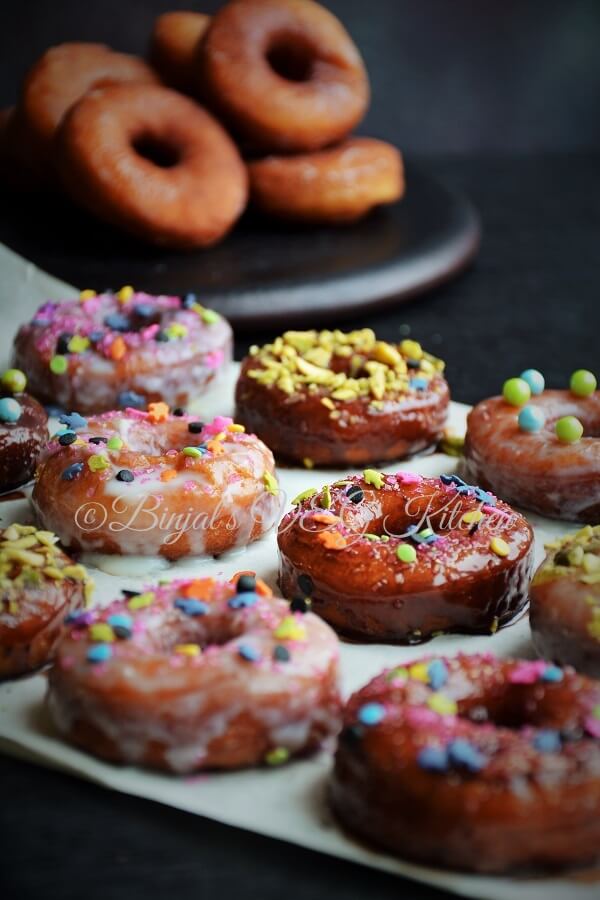 “Everyone I know is looking for solace, hope, and a tasty snack.”- Maira Kalman

You can relax by making doughnuts your choice snack to eat away your concerns without feeling stressed.

Put 150g of water and all the dough ingredients, apart from the butter, into the bowl of a mixer with a beater paddle.

Mix on a medium speed for 8 mins or until the dough starts coming away from the sides and forms a ball. Turn off the mixer and let the dough rest for 1 min.

Start the mixer up again on a medium speed and slowly add the butter to the dough – about 25g at a time. Once it’s all incorporated, mix on high speed for 5 mins until the dough is glossy, smooth, and very elastic when pulled.

Cover the bowl with cling film or a clean tea towel and leave to prove until it’s doubled in size. Knock back the dough in the bowl briefly, then re-cover and put it in the fridge to chill overnight.

The next day, take the dough out of the fridge and cut it into 50g pieces (you should get about 20).

Roll the dough pieces into smooth, tight buns and place them on a floured baking tray, leaving plenty of room between them, as you don’t want them to stick together while they prove.

Cover loosely with cling film and leave for 4 hrs or until doubled in size. Fill your deep-fat fryer or heavy-based saucepan halfway with oil. Heat the oil to 180C. Read our guide on how to deep-fry safely for more essential information.

When the oil is heated, carefully slide the doughnuts from the tray using a floured pastry scraper. Taking care not to deflate them, put them into the oil.

Do 2-3 per batch, depending on the size of your fryer or pan.

Fry for 2 mins each side until golden brown – they puff up and float, so you may need to gently push them down after about 1 min to help them colour evenly.

Remove the doughnuts from the fryer and place them on kitchen paper.

To fill the doughnuts, make a hole with a small knife in the crease of each one, anywhere around the white line between the fried top and bottom.

Fill a piping bag with jam and pipe into the doughnut until nicely swollen – about 1 tbsp per doughnut. After filling, the doughnuts are best eaten straight away but will keep in an airtight tin.

Enjoy! If desired, roll the donuts in sugar or your preferred glaze.

Doughnuts (also spelled donuts) were brought to America by the Pilgrims and Dutch settlers.

With time, they have become a distinctly American treat. In fact, doughnuts were distributed to American soldiers on the front lines of World War I by female Salvation Army workers known as “Doughnut Girls.” But their history goes back to ancient Rome and Greece. They also have a rich history in Jewish cuisine as well.

Everyone has different favorite food, and for some people, it’s doughnuts.

A doughnut can truly brighten someone’s day, whether it has cream spilling out of it or is covered in chocolate.

You must be in love with doughnuts if you can’t go a single day without having one.

And to prove you are a true doughnut lover, you should be familiar with some of the basic varieties.

A jelly (or jam) doughnut is a doughnut stuffed with jelly filling. These light doughnuts will be the hit of any autumn or winter brunch.

They’re sweet and crisp on the outside, a cross between a cake doughnut and an old-fashioned doughnut on the inside, and packed with blueberry bliss.

The glaze will stick to your fingers, tempting you to take a bite of the fresh doughnut. And once you take a bite, you’ll revel in the sweet chewiness.

These cream-filled doughnuts are soft pillows with an easy cream filling. The cream filling couldn’t be easier. It’s made with instant vanilla pudding. The yeast doughnuts are deeply fried to perfection and then the filling is piped into them.

Filled with vanilla custard and dipped in chocolate, these doughnuts would make Boston proud.

A sour cream doughnut is a type of doughnut that incorporates sour cream into the batter. The added cream makes it extra moist and yummy!

This is an apple-flavored doughnut covered with crumb topping. Think of it like a hand-held dessert.

These doughnut holes are so rich, so decadent, so downright perfect, you probably couldn’t handle a whole doughnut’s worth of them anyway.

Just a perfectly normal, moist, yet crumbly chocolate cake donut. But they are far from basic! They have a deep chocolate flavor, and the crispy glaze on the outside gives them some much-appreciated extra sweetness.

Covered with a chocolate layer and sprinkles, this doughnut is definitely for chocolate lovers.

This doughnut is shaped and twisted by hand, then covered with cinnamon sugar.

There are two kinds of crullers includes; Hand-twisted cake doughnuts, which are more akin to maple bars; and French crullers made with pâte à choux, which are lighter than air, with all sorts of nooks and crannies to hold onto their light honey glaze.

With fresh strawberries baked in, and a sweet, tangy pink strawberry icing, these are a perfect breakfast treat.

Slightly crunchy on the outside, cakey and soft on the inside.

All the little cracks in these doughnuts just soak up the shiny, crackled glaze.

Eat and enjoy every variety of doughnuts you like!