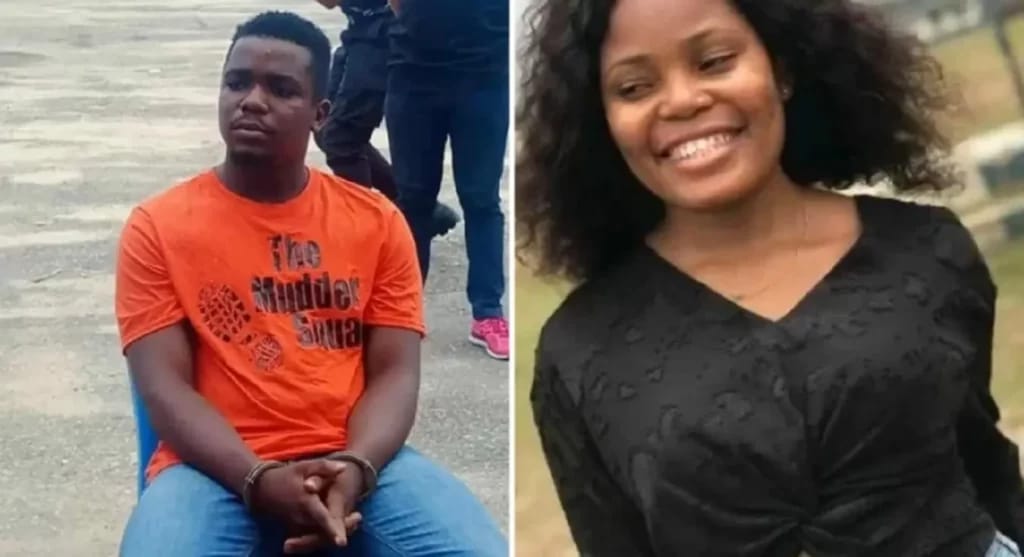 For the murder of Iniubong Umoren, Uduak Frank Akpan has been given the death by hanging penalty.

On Thursday, August 4, 2022, Justice Bassey Nkanang of the Akwa Ibom State High Court condemned Uduak Akpan to death by hanging for the murder of Iniubong Umoren.

This online news source remembers the late Umoren, a philosophy graduate from the University of Uyo in Akwa Ibom State who was assassinated in April 2021 while looking for work before being called up for the mandatory National Youth Service Corps (NYSC) program.

Frank Akpan, the father of Uduak, and Anwan Bassey, the sister of the second and third accused, were released and found not guilty.

Touchaheart reports that the judge declared that the prosecution’s evidence for rape and murder against Mr. Akpan was beyond a reasonable doubt after finding him guilty of the crime in the more than two-hour verdict.

The convicted rapist attempted to flee the courtroom when the verdict was announced but was stopped by security personnel.

On July 26, 2021, the defendant made his initial court appearance and entered a plea of guilty to murder but not guilty to rape.

Although the defendant admitted to killing the victim, the court entered a not-guilty plea for the death of Ms. Umoren.

“For a capital offense, an accused person pleading guilty is neither here nor there. As far as the law is concerned, he is not guilty until we (prosecution) prove our case,” the Attorney-General of Akwa Ibom State, Uko Udom, who led the prosecution team told reporters then.

“So, if an accused person pleads guilty in a capital offence like this, the court normally would enter a plea of not guilty for him.”

To the amazement of many, Akpan later changed his mind during his trial and refuted accusations that he raped and murdered Ms. Umoren.

He claimed to the court that he had a fever the day he entered his guilty plea and that his Investigating Police Office had influenced him to do so.

The prisoner emphasized that a similar statement he gave to the Department of State Services (DSS) was made under pressure and that he also refuted the confessional comments he made to the police.

However, Ama Okeke, a DSS call data analyst who testified in court, showed the jury a tape of Mr. Akpan’s interview that refuted his assertions. The footage was accepted as evidence by the court.

The DSS official said Akpan and Ms. Umoren were at the same cell record and coordinate (location) at Nung Ikono Obio in Uruan Local Government Area when he presented a call record analysis in court.

Okeke claims that following investigations by the secret service, Bassey-Awan, the third accused person and sister of Mr. Akpan, was apprehended in Calabar, Cross River State.

The convict explained to the media how he lured and killed the victim while he was being paraded at the police headquarters in Uyo, in addition to his confessional admissions to the police and the DSS.

The Father of the offender, Frank Akpan, testified in court to prove his son’s innocence by claiming he had a mental illness and was an outpatient at the University of Uyo Teaching Hospital.

Uduak Frank Akpan, the first accused in the murder of Iniubong Umoren to die by hanging the convict attempted to escape but was apprehended as soon as he made the move

Background Of The Story

The victim vanished on April 29, 2021, after being coerced by Uduak Akpan to leave her Uyo residence for a phony job interview.

Uduak Umoh, a friend of Ms. Umoren, claimed to have overheard the woman screaming for assistance as soon as she got on the phone with her.

“She sent me a 1sec audio record on WhatsApp and I had to call her back to know if she wanted to say something to me but immediately I called her, I heard her screaming,” Ms. Umoh had tweeted during the search then.

The predicament motivated some Nigerians to adopt the hashtag #FindHinyUmoren to assist in locating the missing woman or determining who she met and where they met.

Police officers unearthed Ms. Umoren’s body from a shallow grave on April 30, 2011, one day after she was raped and killed at Akpan’s family compound.