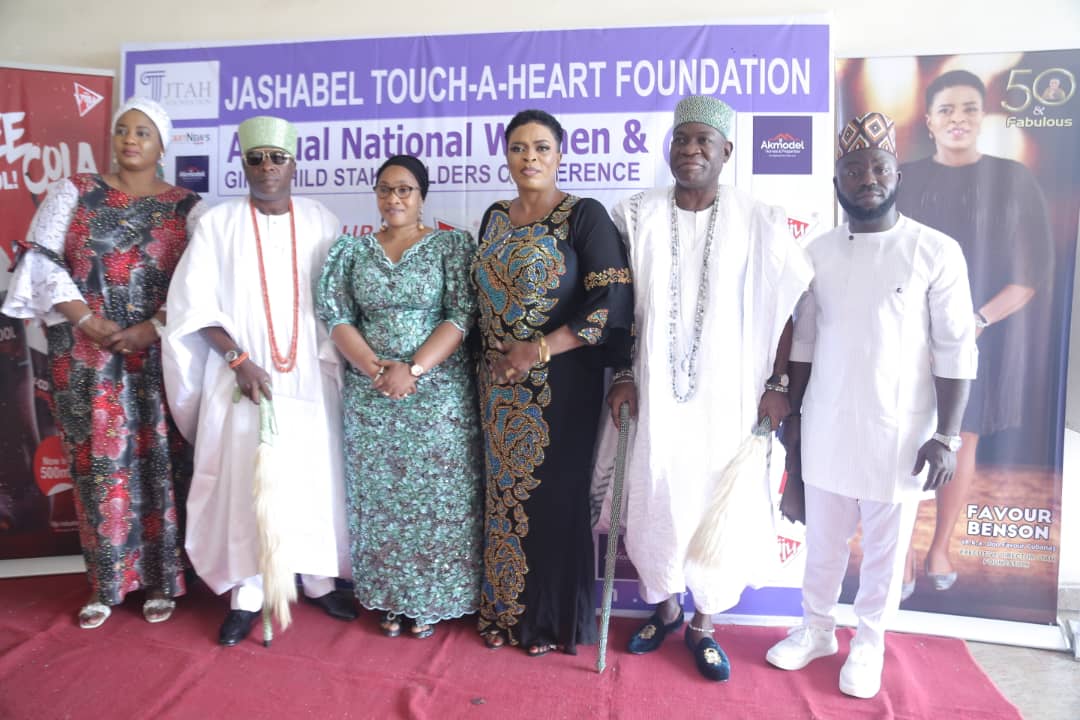 The  Exe. Dir. of JTAH Foundation, Favour Benson hosts Pharm. Uzamat Akinbile-Yussuf, Bldr. Odegade, Royal Father Obateru And Others at the Annual Conference and Her Birthday

It was a day of glitz, glamor, edutainment and kaleidoscope of colours as beautifully attired dignitaries were in attendance at the Jashabel Touch-A-Heart Foundation (JTAH Foundation)’s Annual National Women And Girl-child Stakeholders Conference 2022.

The event started with an opening prayer and reciting the National Anthem. The invited guests and the awardees were recognized before the executive director of JTAH Foundation in the person of Favour Benson gave her opening and welcome speech.

The Hon. Commissioner, Pharm. (Mrs) Uzamat Akinbile-Yussuf gave her Keynote Address before the floor was thrown open for the interactive session and this segment which was superbly handled by Omotola Adebanjo was quite interesting.

Incidentally, the event day also happened to be the birthday of the executive director – Favour Benson, so it was a 2-in-1 event.

The Nollywood Industry was not left out as they came in their numbers to celebrate with one of their own as executive director of JTAH Foundation is also a member, some of them are: Florence Richards, Pst. Tony Chukumah (an awardee), Ruth Jacobs, Amina Indi just to mention a few.

Crews of National Television Authority (NTA) and Television Continental (TVC) were also around to cover the event.

There were different entertainers around to spice up the flavour of the event and entertain the guests such as; Adigun Olowe (one of the youngest Chiefs at 6years old), Meyrah, Segun Obe, DJ etc.

Friends and colleagues of the foundation and the celebrant from the corporate world, churches and associations were also in attendance.

The event was co-anchored by Rose Eya Okwoli, MD of ROSEYA Multitec and a friend of the house.

There were enough food, drinks and gifts to share to all guests as it was dance, dance, dance to the end.