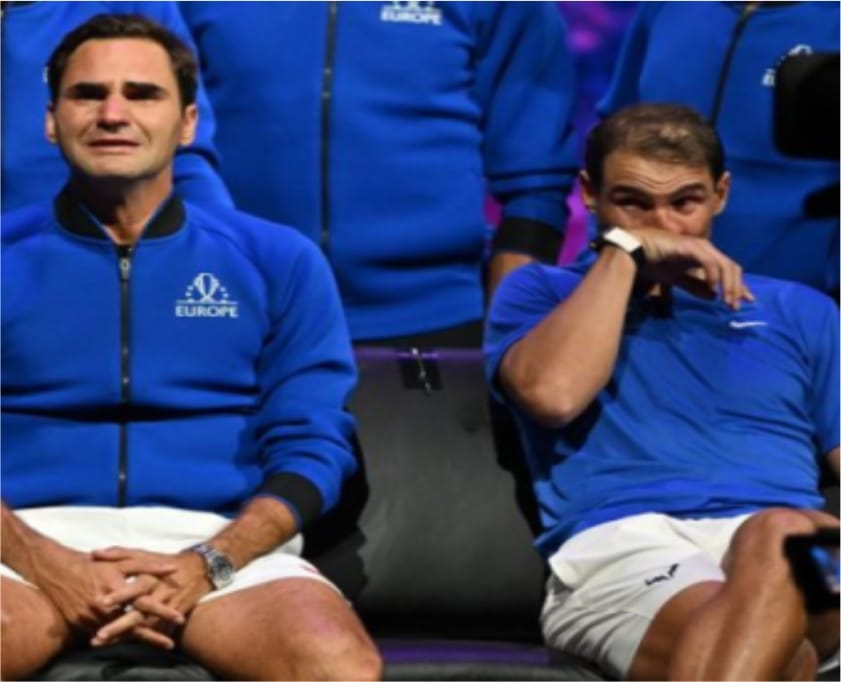 Despite being denied a Cinderella tennis career with a doubles loss at the Laver Cup early on Saturday with Rafael Nadal, Roger Federer called his tennis career as a “wonderful ride.”

Due to a knee injury, the 20-time Grand Slam champion has not competed since the quarterfinals of the 2021 Wimbledon. He announced his retirement last week at the age of 41.

Despite a protracted period of forced inactivity, the Swiss briefly displayed some of his former smooth forms during the match against Team World’s Frances Tiafoe and Jack Sock at London’s O2 venue.

Playing with long-time friend and rival Nadal, the two former world number ones won the first set to the delight of a feverish, partisan crowd, but the Americans rallied to win 4-6, 7-6 (7/2), 11-9.

The result meant Team Europe was locked at 2-2 with Team World at the end of the opening day of the Ryder Cup-style event.

“We’ll get through this somehow, will we? Right?” Federer said with a cracked voice during an emotional post-match farewell on the court.

“I’m happy, I’m not sad. It feels great to be here and I enjoyed tying my shoes one more time. Everything was the last time. The match was great, I couldn’t be happier. It’s been wonderful.”

Together, Federer and Spain’s 36-year-old Nadal, who has had a long-running rivalry, have won 42 Grand Slam singles titles during the heyday of the men’s game.

They were, however, on the same side of the net in a match that began late on Friday as a fitting farewell for Federer, who turned professional nearly 25 years ago.

The Swiss great and Nadal entered the pitch-black court wearing white headbands and blue jerseys, to a thunderous scream and standing ovation.

At the beginning of the match, both doubles pairings held serve rather handily, with yells of “Let’s go, Roger, let’s go” breaking out at 3-3.

In the tenth game, Federer and Nadal capitalized on their first break point to take the set. To thunderous applause, Sock netted a backhand to seal the victory.

By easily winning the second set tie-break, the Americans tied the match.

In a tense match tie-break, Tiafoe and Sock won the next three games to defeat Federer when he was unable to serve out the match at 9-8.

Following the match, the Swiss was filled with emotion and hugged colleague Nadal while waving to the audience.

“Playing with Rafa on the same team, and having the guys, everybody here, all the legends… thank you,” said Federer, who was joined by his parents, wife Mirka, and their four children.

“It does feel like a celebration to me,” he added. “I wanted to feel like this at the end and it is exactly what I hoped for, so thank you. It has been a perfect journey and I would do it all over again.”

Nadal, who was also visibly emotional, said it had been difficult to handle the intensity of the occasion.

“For me, it has been a huge honour to be a part of this amazing moment of the history of our sport, and at the same time a lot of years sharing a lot of things together,” said the Spaniard.

“When Roger leaves the tour an important part of my life is leaving too.”

The six-strong Team Europe also includes Novak Djokovic and Andy Murray — the other two members of the so-called “Big Four” who have dominated the men’s game for so many years.

Federer decided not to play singles matches this weekend, therefore Matteo Berrettini of Italy will step in as his backup.

Casper Ruud of Norway and Stefanos Tsitsipas of Greece each earned victories in the opening round of the Laver Cup, which Europe had won all four times before.

Tsitsipas defeated Argentina’s Diego Schwartzman 6-2, 6-1 despite a spectacular on-court protest by a protester who lit his own arm on fire to oppose the usage of private jets.

Before all eyes shifted to Federer in the evening session, Murray lost a grueling match to Alex de Minaur 5-7, 6-3, 10-7.

The Swiss are leaving the stage 19 years after winning his first Grand Slam title at Wimbledon in 2003.

He retires with a men’s record of eight Wimbledon crowns, 103 titles overall, and more than $130 million in prize money, all won with a game defined by a rare elegance and precision.

Nadal (22) and Djokovic (21) have both surpassed Federer’s tally of Grand Slam titles but Team World captain John McEnroe said Federer’s retirement would leave “a void that will never be filled”.