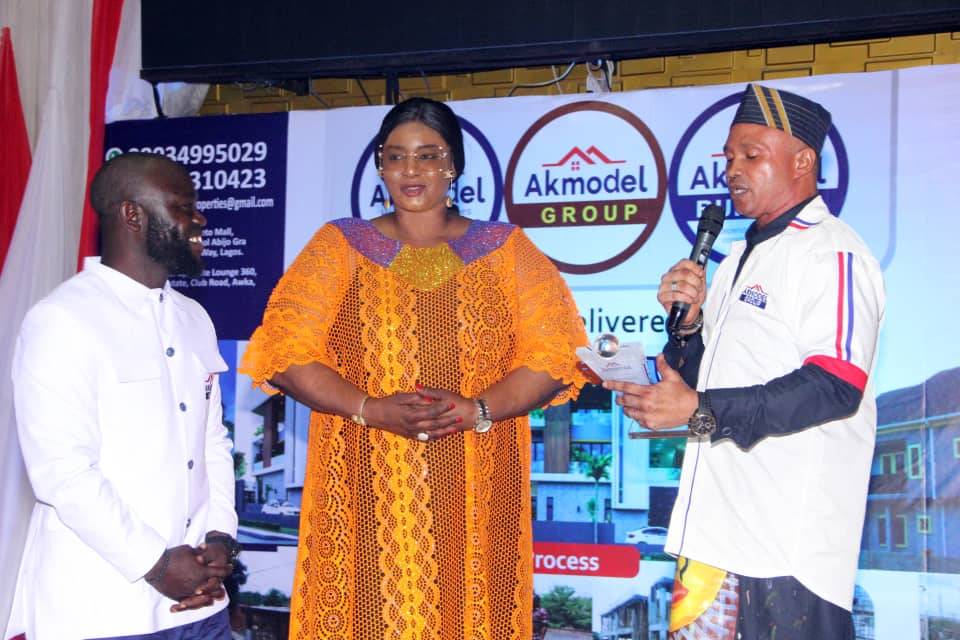 The much awaited and expected AKMODEL Homes and Properties (of AKMODEL GROUPS) event finally took place over the weekend.

The event which was their second year anniversary also witnessed the unveiling of Paul Obazele as a brand ambassador.

In his welcome address, the MD/CEO of AKmodel Groups, Builder (Dr.) Abdulhakeem Odegade, said he feels really excited to mark the second anniversary of the company even though the journey has not been easy.

The keynote speaker (Dr.) Olufemi Emmanuel Akinsola fniob, fnibifm who spoke on the topic, *“The Revolution In the Real Estate Industry: Identifying Causes And Proffering Steps To Forestall Future Building Collapses”*, revealed that 460 buildings have collapsed in the last 47 years in Nigeria.

According to him this statics shows the importance of building right and trusting professional builders as real estate sector contributes majorly to Nigerian GDP.

However, Akinsola described Builder Odegade as a professional, someone who will never cut corners even though he is just two years in the real estate sector but eighteen years in the construction industry as a registered builder.

He also called on builders to be professional while carrying out their building projects to avoid more building collapse in the country.

One of the high points of the event was the unveiling of Nollywood veteran actor, Paul Obazele as Akmodel Groups’ brand ambassador.

In his acceptance speech, Obazele who was once the president of the Association of Movie Producers (AMP) and Life Patron of Edo Film Makers Association (EFMA), said he will contribute his own quota to ensure the company moves to a higher level.

CEO of Akmodel groups, Builder (Dr.), Abdulhakeem Odegade said that the company is out to fill up major housing deficits in the country through real estate development and construction sticking to the real estate industry best practices and influencing others to do the same.

The CEO then disclosed that there’s a plan to begin the *Akmodel Media and Nollywood Estate (with survey plan)*, which is aimed at supporting the company’s media partners and Nollywood friends.

Aside from the cutting of the anniversary cake, four (4) cars, recognition awards and commendation plagues were given to appreciate some partners for their various contributions to the company.

A photo painting of AKMODEL M.D was presented to him by Miss Arts on behalf of Oshodi Arts Gallery.

The event which was anchored by Nollywood actor, Jude Orhorha had in attendance royal fathers, real estate gurus, and builders, they include: Bukola Agbaminoja (Executive Secretary of Lagos State Film and Censors Board), CSP. Titilayo Oriyomi Oluwasanmi (Lagos Motopol Department), Dr. Kenny Muibi (MD/CEO of MKH Group) Miss Arts, Favour Benson (Media Consultant) Chief Olamilekan Adebayo (Adigun Olowe Yoruba), who is just six-year-old, the gifted and youngest chief in Africa, recited and translated some inspiring Yoruba proverbs to the amazement of everyone at the event.

It indeed was an occasion to remember, filled with glitz, glamour, royalty, class and panache.