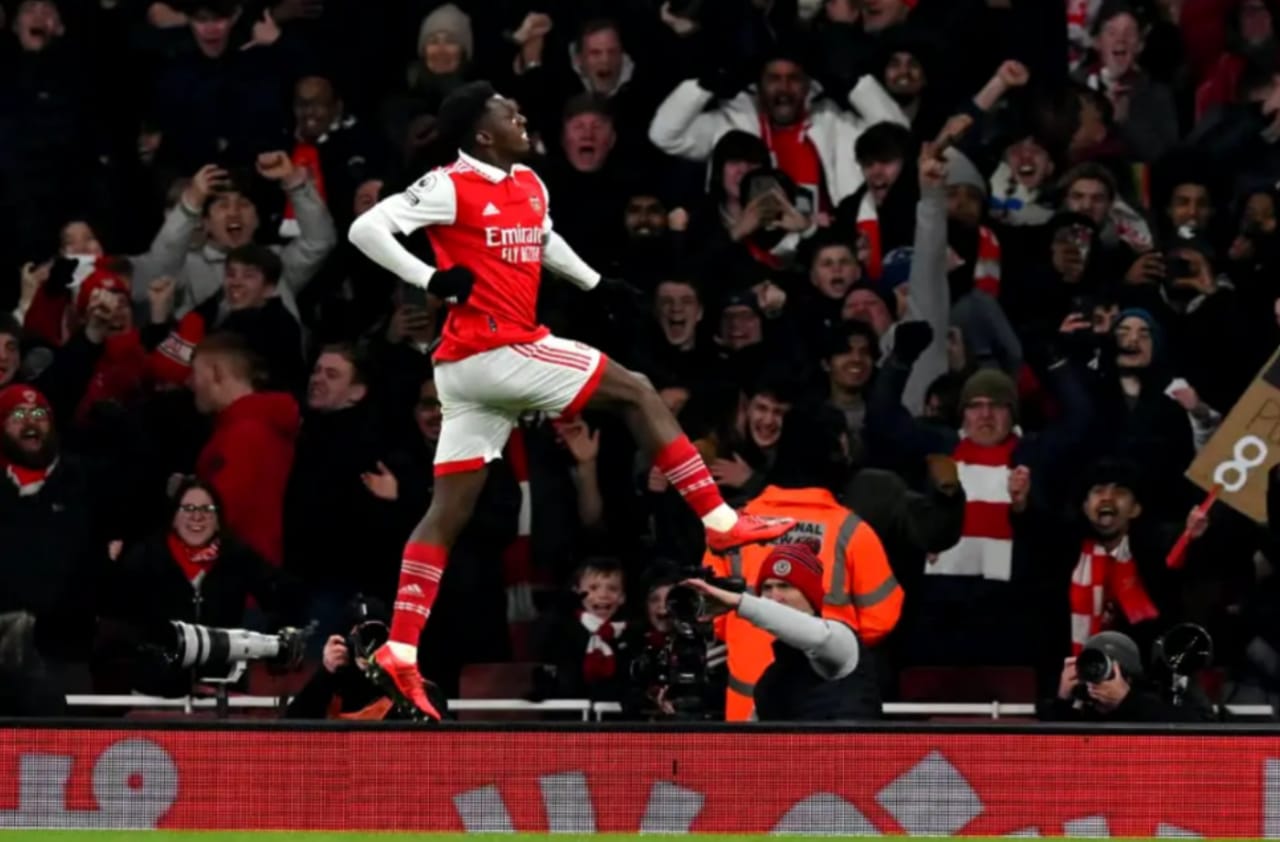 Arsenal made a significant statement about their Premier League intentions by rallying from behind to defeat in-form Manchester United 3-2, In front of a boisterous Emirates crowd on Sunday.

The Argentine defender Lisandro Martinez headed in after Arsenal failed to clear a corner, leveling the tense game for the visitors, who had been dangerous on the break throughout.

In the 90th minute, Nketiah turned the ball in to give the Gunners a goal they deserved after pouring forward in pursuit of a victory.

Manchester City, the defending champions, had earlier cut the deficit to to two points with their 3-0 victory over Wolves, thanks to Erling Haaland’s fourth hat-trick of the year.

With loan signing Wout Weghorst once more leading the line, Scott McTominay took the place of Brazilian midfielder Casemiro, who was ineligible after receiving his fifth booking of the year in United’s midweek draw with Crystal Palace.

Leandro Trossard, a late-week addition to Arsenal from Brighton, was forced to make do with a spot on the bench as Mikel Arteta picked an unchanged lineup.

At the Emirates, there is a growing sense of optimism that the Gunners can finally end their lengthy wait for the Premier League title—they haven’t won it since 2004.

Thomas Partey barely missed the target as Arsenal charged forward as they exploded out of the gate.

Rashford, who was assisted by Bruno Fernandes, raced past Partey with ease and sent a low shot from 25 yards into the corner of the net to give United the lead in the 17th minute.

Just seven minutes later, Granit Xhaka’s cross was nodded in by Arsenal’s in-form Nketiah after Aaron Wan-Bissaka slipped at the back post.

Now that the momentum had switched in their favor, the home team poured forward, but United came dangerously close to regaining the lead when McTominay forced a diving save from Aaron Ramsdale.

When Arteta’s emotions got the better of him shortly after the half-hour mark, referee Anthony Taylor issued him a booking, but the first half concluded with a draw despite few clear-cut opportunities.

After the break, Arsenal was once more the first to pose a threat, pressing forward in search of a second goal before taking the lead in the 53rd minute.

Saka of England moved the ball to his left foot and drilled a precise shot past David de Gea from outside the box into the United goal as Christian Eriksen defended him.

Lisandro Martinez rushed himself at the ball after Ramsdale dropped it following a United corner and looped a header into the goal.

Nketiah fired a close-range shot at De Gea as time wore out, as United struggled to maintain persistent possession of the ball.

Nketiah’s second goal of the game gave Arsenal all three points after a thorough VAR review determined that he was onside, saving United from holding out for a draw.